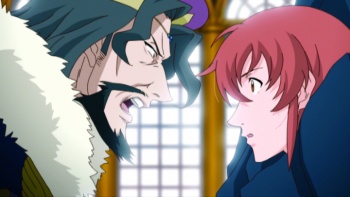 In my review of the first half of Romeo x Juliet, I concluded that it was an enjoyable tribute to the original Shakespearian play. As such, my initial concern going into the second half was whether it could maintain the momentum and enjoyability of the first. I am happy to report that my concerns were, for the most part, unfounded.

The story picks up right where it left off, with Romeo and Juliet having been captured by the Carabinieri and brought before the judgment of Lord Montague for running off together. Juliet is sentenced to death, but before the sentence can be carried out, Romeo helps her to escape. For this act of defiance, Romeo is exiled from Neo Verona and assigned to oversee a mining operation far from the reaches of the nobility and luxury he's used to.

This exile provides an interesting vehicle for the development of Romeo's character, who got the decidedly short end of the stick compared to Juliet in the first half of the series. As he works in the mines, he begins to sympathize with the miners' plight, and comes to realize how life is for someone who is not of nobility. Meanwhile, Juliet and the surviving servants and retainers of the Capulet family retreat from Neo Verona to plan their rebellion. Because of this separation between the main characters, in comparison to the first half of the series, the romance between Romeo and Juliet has very little time to grow any further. However, I hardly noticed this until the series was over, because the two subplots - Romeo's in particular - were so interesting.

The second half is also where the plot and setting truly diverge from that of the base material. Romeo x Juliet was already very loosely based upon the original play, but the first half never really went out of its way to make that blatantly obvious. But in the end, I suppose there were really only two ways the second half could go: It could either play out much like the play's later acts, or it could go off in a completely new direction - and Romeo x Juliet chose the latter.

The "new direction" I'm speaking of mostly has to do with the revelation of the purpose of Escalus, the magical tree hidden deep underneath the castle of Neo Verona. In my review of part one, I mentioned that the continent of Neo Verona is floating in the air (in fact, the whole setting of Romeo x Juliet could be said to be "Romeo and Juliet, but in the air"). As it turns out, Escalus is responsible for keeping Neo Verona "afloat," so to speak. This is important, as it turns out that Escalus is dying, and only the sacrifice of a daughter of the Capulet line can restore it, and the only Capulet daughter that still lives is Juliet.

Sadly, this plot point doesn't really work as well as the rest of the series, and this is largely because of its own bad timing: The nature of Escalus isn't even introduced until after the battle with Lord Montague is nearly concluded. Indeed, the "main" storyline involving Montague is finished two episodes before the end of the series, and then the Escalus plot element is brought into focus - after almost everything the viewer is emotionally invested in has been tied up. The whole thing just comes off like an afterthought meant to supplant the real ending of the series, rather than a valid plot line in its own right. It's a shame, too, because this is about the only real problem the series has.

On a more positive note, Romeo x Juliet's good story continues to be supported by great animation. The animations are fluid, the environments varied, and the visual style is perfect for the anime's low-key fight scenes in comparison to other action-oriented series. The soundtrack is also as good as in the first part - if not better - and I don't think I'd be too far out of line by saying that the English dubbing ranks up there with the likes of Cowboy Bebop and Fullmetal Alchemist.

In the end, Romeo x Juliet is an excellent anime series that expertly mixes action, romance, and drama. There's just one problem I can see: the fact that it's based on a Shakespearian play. No doubt, some Shakespeare fans will dislike this series simply because it distorts the storyline of the original Romeo and Juliet. But I think that's a little unfair, because ultimately, Romeo x Juliet is telling a different story than that of its namesake, and the anime does plenty to differentiate itself from the original. When compared to great Shakespearian works, Romeo x Juliet will undoubtedly fall flat in some areas, but then, it's not a great Shakespearian work, is it?

Bottom Line: An excellent continuation and conclusion to an excellent anime series, marred only slightly by a ending that seems to drag its feet.

Recommendation: If you believe Romeo and Juliet was the greatest single work of literature in the history of mankind, you're probably not going to like this series. If you're willing to judge it on its own merits, Romeo x Juliet is an enjoyable 24 episodes of action, romance, and drama.

Romeo x Juliet: Juliet Collection consists of the last 12 episodes of the series.

During the write up of this review, Josh Viel couldn't help but wonder why nobody has made "Julius Caesar... but in SPACE" yet.