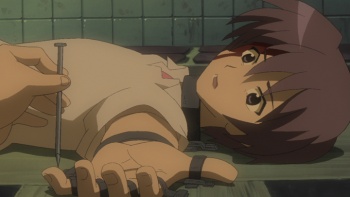 Every once in a great while, you come across an anime that completely alters your perception of what constitutes a "great series." For this reviewer, that anime was Higurashi no Naku Koro Ni, or the localized When They Cry, a series based on the 7th Expansion games released in Japan.

A mature show steeped in mystery, Higurashi tells the story of a group of friends living in Hinamizawa, a rural village held captive by a cruel, bloody legacy. For the past four years, on the night of Watanagashi, the Cotton Drifting festival, a series of mysterious deaths has occurred. In each case, one person is brutally murdered and one disappears without a trace. These serial murders have been attributed to the wrath of Hinamizawa's patron God and became known as "Oyashiro-sama's curse." The story of Higurashi takes place during the time of the fifth Watanagashi since these events began.

This is where Higurashi changes pace from traditional storytelling. The first season is composed of a series of story arcs, each of which serves to raise questions about the meaning behind the murders, postulates potential truths, and proceeds to disassemble the cast in an inexorable series of tragic events and unfettered brutality. These arcs often begin with a brief vision of the horrors to come before returning to the colorful, happy portrayal of our protagonists' shining days in Hinamizawa, leaving us to wonder how things will reach the terrifying scene we just glimpsed. Once an arc has ended, everything resets to a happier point in life and we watch as a new tale of tragedy and paranoia unfolds.

Despite the seemingly disconnected nature of the arcs, they are all part of a greater whole. While the events unfold in radically different fashions each time, there are certain key elements, such as the past up until that point, that remain the same. This first season is all about raising questions and laying groundwork, with the exception of the "Eye Opening" arc; a re-telling of earlier events from a different perspective that reveals what truly happened, while still raising new questions of its own.

With that said, you can expect this installment of Higurashi to leave quite a few questions unanswered. It's not until the climax of the second season, Higurashi no Naku Koro Ni Kai, that every question will have found its answer.

The stories are focused on a handful of interesting major characters with very different attitudes and histories. The cast is rock solid, comprising of the boy that just moved into town, the heiress to the strongest family controlling the area, the twin sister that was cast away, the young priestess with a second personality that foretells the future, the daughter of a family ripped apart by Oyashiro-sama's curse, and the girl that has survived it once before. While there is relatively little in the way of a supporting cast, depending on which of the individual protagonists the current arc is following, the others tend to become the support.

While the core cast includes only a single male character, it actually works surprisingly well. There are no attempts to play the series up as a harem anime, nor are there any of the juvenile panty shots or perverted humor you typically find in a one-boy-several-girls cast. Although the series is schizophrenically driven by extremes of light and dark, Higurashi successfully retains its mature attitude even when at its most lighthearted.

Alternately frenetic and cold, the soundtrack serves to highlight the extremes of the series. The audio enhances the mood exceptionally well, creating a chilling atmosphere during eerie scenes or instilling a sense of paranoia during an otherwise harmless moment. The series sports one of the slickest, most haunting sets of intro credits I've seen to date, both visually and aurally.

In spite of my praise, Higurashi isn't without its faults. Words cannot describe the atrocity of the dubbing, which feels less like a dub and more like a poorly executed attempt at a character-butchering rewrite. I can't recommend watching it subtitled strongly enough. The art quality is also uneven at times, though it always seems to pull together when it really counts.

This reviewer has seen the full two seasons and, upon watching the first season again with full knowledge, I am stunned at how well thought out the writing is. No words or actions are wasted. There are countless clues and pointers throughout the series, many of which are easily misunderstood or completely overlooked during that first viewing.

Bottom Line: It's an exceptionally well-written mystery series about paranoia, horror and hopelessness, all wrapped together in a bizarre dichotomy of light and dark elements. Unfortunately, it takes the second season to answer many of the questions you'll be left with.

Recommendation: If you can stomach the brutality, you'd be doing yourself a disservice not to watch this series and try to puzzle out all of the hidden truths. Once you've driven yourself crazy, pray for a North American release of Higurashi no Naku Koro Ni Kai or learn Japanese. Now.

James Henley replaced his entire Top 3 choices with the one-two punch of Higurashi and Higurashi Kai after watching them, even if that makes no mathematic sense.