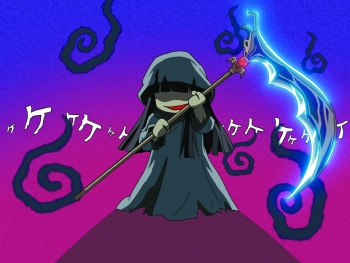 The Wallflower is a reverse harem anime. For those who are unfamiliar with the term, it's a genre that generally targets a young female audience, focusing on a central female character with a supporting male cast. While a series filled with "beautiful men" who take advantage of costume changes at every opportunity might not be your cup o` tea, there is no need to fret fellas, it's directed by Shinichi Watanabe - the man responsible for the madness in Excel Saga and Puni Puni Poemi - so how bad can it be?

"Listen kid, I hate ugly girls." This was the response Sunako Nakahara received after confessing her feelings to her first love. Until that point she was a normal girl; she wore make-up, worried about acne, and did her best to be pretty. Upon hearing she was ugly Sunako rejected all things of beauty and submersed herself into a dark world of isolation. Her incredibly wealthy aunt serves as the landlady for four beautiful young men: The playboy Ranmaru, the shy-gentlemen Takenaga, the cute Yuki, and the bad-boy Kyouhei. Auntie offers her tenants free rent if they can turn her niece into a lady; if they fail, the cost will triple.

For the story's sake I'll accept that Sunako is strange and creepy. She loves horror movies, skeletons, and her best friend is a human anatomy model. Though, it's not as if she has visible stink lines, picks her nose, or scratches her bum while eating -- the sort of things socially awkward people do in real life that make us cringe.

The series starts out strong in all respects. There is a fair amount of character development, the interaction between cast members is great, the plot advances forward, and above all, it's funny. The over-the-top humor easily tears down any reservations one might have, but don't let that get your hopes up.

With hindsight, the initial progress was too fast. Early phases that may have deserved more attention were passed over hastily; Sunako spends a grand total of one episode "ugly" and half an episode as an outcast at school. Moreover, the whole series could easily be wrapped up with a single 1980's-style, make-over montage. It is unfortunate that The Wallflower quickly runs out of steam, leaving its viewers seemingly stranded in a perpetual hell of running gags.

The jokes which at one point were enjoyable become incredibly repetitious: The nose bleeds, Yuki's helplessness, "the radiant creatures!!!", and most painfully obvious with the goth-goth-loli-loli sisters. From time to time the show pokes fun at its own repetition, but does being self-aware justify being flat-out annoying?

The occasional piece of drama is tossed in to mix things up. Whether we are supposed to take these moments seriously or not is up for some debate. The bulk of the drama deals with Kyouhei's difficulty being too good-looking; even the more heartfelt moments involving Sunako seem melodramatic.

The animation and visual style are very solid, though visual gimmicks like super-deformed and white, featureless chibis might be employed a bit too frequently. These gimmicks do add to the hectic and zany feel of the comedy, so it's hard to say. Sunako spends the bulk of the series in a super-deformed state, making the visuals all the more intense for those rare moments when she assumes her full-detailed form. The four boys on the other hand, are peculiar looking. Perhaps too much emphasis was put on making them stand out as "beautiful", and the end result is just plain weird. Their facial features fall somewhere in the middle grounds between the male cast of any Square Enix game and Dr. Frank N. Furter, while the proportioning of their bodies' seems more appropriate for a horror series a la Hellsing.

In most respects the English dub is as good as - and sometimes better than - the Japanese audio. However, at times the excessive shouting would have you believe the entire cast is channeling the ghost of the late infomercial-king Billy Mays. Not that the Japanese audio contains any less shouting; it just didn't irk me the same way. The English voices do seem more appropriate for their characters, even if Ranmaru does sound a touch too similar to Napoleon Dynamite. In Japanese, the four boys sound far manlier than their appearances merit, especially with Yuki. Sunako's dub warrants a mention of its own, it's very easy for English voiceovers for such high-octane characters to sound awkward, but not in this case.

Bottom-line: The Wallflower has some genuinely funny moments, and can be amusing because of its frantic over-the-top comedy styling, but you know what they say about too much of a good thing... The humor quickly becomes repetitious, and eventually you just want to get it over with as quick as possible... like pulling off a bandaid.

Recommendation: It's not about teenagers saving the galaxy, so it's a nice change of pace. It might be a decent series to slowly wade through between watching other titles, but I wouldn't recommend it.

Salvan Bonaminio always thought Sunako was fine just the way she was.