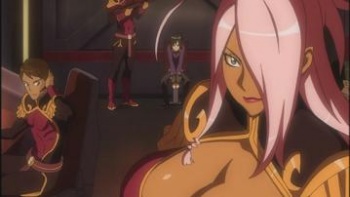 Dragonaut: The Resonance is an anime about breasts, or so that's what I gather after watching part one of the series. The first line on the back of the DVD seems to confirm my suspicions: "With a deadly asteroid hurtling towards Earth, sexy human Dragonauts in tight uniforms, and their curvaceous dragon companions come together..." and the rest isn't really important - suffice it to say it contains the words "voluptuous" and "flyboy" along with the phrase "quick to grab by the seat of his pants". It's pretty obvious what Funimation saw as the key selling points here.

As the name would imply the series has something to do with dragons. Don't get too excited though; they aren't of the kick-ass, medieval, fire-breathing variety or even the semi-cool kind from space only Mothra could defeat. These alien life forms, when not spending their afternoons lounging around in human form, are a giant mecha sort of dragon more closely resembling oversized Pokemon with cockpits fastened to their spines than anything else.

I'm not entirely sure the word 'mecha' applies in this case as they are mechanical in outward appearance alone; it'd be safe to assume this is simply because animating hard surfaced 3D objects is less daunting than organic. The presence of a manned cockpit on some of the dragons also confounds me. I understand the relationship between master and dragon, however would it not be more sensible to issue commands via communications link? I digress...

The plot is practically nonexistent. It is only in the final few episodes of first half of the series that a discernible story arc begins to take shape. By this point it's a little too late in the game - if any reasonable person hasn't stopped watching altogether, they will still find it nigh impossible to wash off the stink of first 10 episodes.

For what it's worth the events early in the series go something like this: Jin, a young boy, finds himself in a dangerous situation involving a dragon. He is rescued by Toa, a mysterious girl who is secretly a dragon. Over the course of the next two days Toa and Jin rescue one another from various would-be captors a dozen times or so. During this time Gio, also a dragon, joins the mix to protect Toa. There's supposed to be a love triangle, but there really isn't. An inconsequential best-friend-turned-enemy is haphazardly forced in.

The lead characters have incredibly shallow motives. Kazuki, the former best friend, is jealous that "his" dragon Gio prefers Jin as a pilot. Jin is only interested in saving the girl, which would be noble except his sole driving force in doing so is to remedy his own loneliness. To make matters worse both whine nonstop and are generally unlikable. Every other minute or so Jin makes a profound statement about how so very lonely he is, and Kazuki reminds the viewer that Gio was supposed to be his just as frequently.

Of course, not all the characters can be bad. Some of the secondary characters are quite charming. Unfortunately, that charm is quickly lost the moment a big-tittied mammoth enters the frame. 'What exactly is a big-tittied mammoth?' you might be asking. Apparently it's what character designer Makoto Uno believes to be sexy. You may recognize his work from Witchblade, or as I like to call it, s-CRY-ed: Jiggly Edition. This time around he brings his art form to a whole new cup size - an outlandish, misshapen, cup size that detracts from any real impact a scene might have.

Moving past the tremendous busts - which isn't easy - the characters look like cosplay contest rejects from an anime convention. The 2D animation is stiff, the CG is just plain awful in every possible way, and the backgrounds actually aren't half bad. The Japanese voice acting is well done, and most will find the English dubs very tolerable. The soundtrack is also quite solid, but let's be honest, does it even matter at this point?

No worries though, at the very least Dragonaut has fan service for all! Sure it's awkward! But hey, it has breast of all sizes from small to ginormous, a little bit of ass, a loli, and plenty of nude manliness for the ladies -- that has to count for something, right?

Bottom-line: Dragonaut: The Resonance is terrible, enough said. It's worth watching several minutes of the show just to have a good laugh at its expense; I wouldn't recommend it in any other capacity.

Recommendation: If you're really in the mood for oversized breasts and fan service you're better off watching Witchblade.

Salvan Bonaminio wanted to coin the word 'gigantankerous' in this review but wasn't sure the intended meaning would be easily picked up.