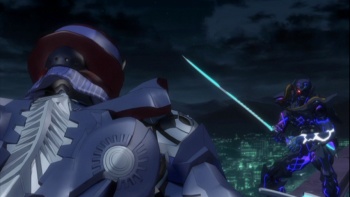 Hermann wanted to race motorcycles. Gerd, his mentor, cut him from the racing team - he knew Hermann wasn't cutthroat enough to take the kind of risks that could win races. Years later, Hermann is an officer of Xenogenesis Assault Team (XAT), a super-cop who rides a motorcycle equipped with missiles. In this horrible future, corpses are rising up as "Demoniacs," evil robots that kill every human they can find until they're stopped, and it takes some serious firepower to take them down.

Even worse, the Demoniacs can become Amalgams, fusing with any machines they can touch - and they just love to amalgamate with cars and motorcycles, which leads to high-speed chases and drive-by killing sprees. The XAT still has no idea where these Demoniacs come from or why they do what they do. People are scared and desperate. They need a hero...

At first, it looks like Gerd might be that hero. After a Demoniac attack leaves him paralyzed from the waist down, Gerd has a "miraculous" recovery, not only learning to walk again but also to transform into a bio-mechanical killing machine with laser-powered motorcycle chains as weapons that can kill Demoniacs in one hit. The people rejoice! The champion motorcycle racer is back, and he has super-powers! The public cheer for their new hero! Welcome to Blassreiter.

Naturally, there's a lot more going on, but we can't talk about it here without some serious spoilers. Gerd may look like a hero, but he's got issues with his previous racing team that will come to a head later. A mysterious robot known only as Blue appears to also fight the Demoniacs - but where does he come from, and why does he do it? (And why does he have a hologram of a cute little girl as a sidekick?) Who is Beatrice, the strange woman with bizarre hair, makeup, and glasses, who wanders around seducing the major characters, and who isn't far away whenever a Demoniac attacks happens? Where do the Demoniacs really come from, anyway?

The themes of demonic possession and religious salvation recur throughout the episodes. Xenogenesis Assault Team's headquarters is a converted church, complete with stained-glass windows. Hero-worshipping citizens praise Gerd as a "savior" and they pray for his release for jail. Victims continue to shout things like, "I'm still human!" and "Don't hurt me!", even as they shrug off multiple gunshot wounds and wade through gasoline fires, while they slowly metamorphose into spiky robots with glowing body-weapons. Blassreiter's repeated attention to the horrors of the robot-corpse menace adds drama to what might have been just another show about shiny toys shooting each other.

The scripting is consistently good, and the voice acting - both Japanese and English - is up to task. Dialogue is mostly unimaginative, but the characters' reactions to each other are refreshingly mature. Colors for most things are natural and muted, except for the Demoniacs - just like "riced-up" cars might have running lights, many robots have neon appointments, which is appropriate for a show based on high-speed chases. The computer-generated effects mix seamlessly with the cel animation. In a particularly inspired choice, Blassreiter is set in Germany, with narrow alleys and lots of brick-and-mortar two-story buildings that whiz by, while riders cling to their rocket-shooting motorcycles. Blassreiter is an anime that justifies your wide-screen high-definition television, and your surround-sounds speakers.

Bottom Line: Vivid action with inspired character designs, combined with simple plot and easily-identified characters, make this anime fun to watch in short installments - one episode a week. The occasional plot twists reward long-term viewers a story that won't exactly surprise you, but it's enough to hold your interest about how it will all play out.

Recommendation: Teenage boys should love this show about biker-robots cutting each other in half with their laser-chains. Otaku will appreciate the occasional scene with adult themes, and just how freakin' awesome those zooming chases are. Everyone else might want to catch the first episode before they consider watching the rest. You might need a bigger television and some motion-sickness pills.