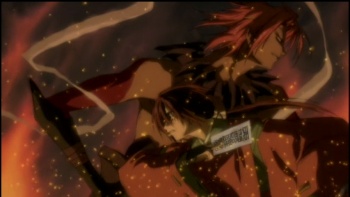 Shonen Onmyouji is an interesting departure from what I often see: As a historical fiction, the series is based around the adventures of Abe no Masahiro, the fictitious grandson of the famous and not-so-fictitious Japanese onmyouji, Abe no Seimei. It's a wonder to me why we don't see more shows like this; historical fiction gives a concrete basis for a setting, and even if the series takes the series takes the setting and adds more fantastical elements to it, it still gives the viewer something more to connect to. And with Japan's long and colorful history, there are surely more stories to be told, right?

At the same time, I can appreciate why I don't see more of them, because while Shonen Onmyouji has a strong historical basis, that history isn't one that I - or, I suspect, most of you - am very familiar with. This issue is highlighted by the fact that the series doesn't really make any effort to introduce any of the historical characters or locations to the viewer; they're simply a part of the story from the first minute in. I could call this a flaw, but I won't; this is, after all, a show produced firstly for Japanese audiences. But that doesn't change the fact that if you don't know very much about Japanese history (like, say, who Abe no Seimei was) you'll probably miss out on a lot of the subtleties of the setting.

If you look past the historical basis of the series, you'll find that Shonen Onmyouji is a fairly average outing. Masahiro starts off as a character that everyone expects to become a powerful onmyouji and follow in his grandfather's footsteps; so much so that Seimei names Masahiro his successor. The only problem? Masahiro's not particularly good at onmyodo, the discipline of astrological spell-casting that all onmyouji practice. He very quickly finds the motivation to improve himself however, which starts the generic "I must overcome obstacle x to become y" plot that is a staple of the Shonen genre.

What saves Shonen Onmyouji from falling into complete, generic mediocrity is the general lighthearted attitude it takes in respect to its storytelling. Most of the characters have a sort of lighthearted charm about them, and the series often opts to throw more humor into the mix than drama. That is not to say the show lacks drama, but even in the more serious points of Shonen Onmyouji's story, there's always a sense that the show is never taking itself too seriously.

That is, until the final story arc. Apparently not satisfied with the charming-if-light approach to storytelling, whoever was in-charge of the creative direction for Shonen decided to pull a sudden genre change. As a result, the entire last five episodes are serious, dark, and generally gloomy, with none of the lighthearted attitude I liked about everything preceding them. Now, normally, this sort of stunt would be pretty high on my List-Of-Things-To-Never-Do-In-A-Television-Show, but... I actually found myself following the last few episodes with a sense of anticipation I had not expected. Now, don't get me wrong, the transition is extremely jarring, and that almost put me off on principle. But at the same time, the result is - surprisingly - tolerable.

Visually, the show is about average, with animation that is neither exceedingly good nor exceptionally bad. The fight scenes do have their moments, but - for the most part - they aren't any better than what you'd expect. On the audio side of things, the music is fairly good, as is the Japanese dub. Don't touch the English dub though; I couldn't tolerate fifteen minutes of the shrill voices of the two main cast members. Keep in mind, this is coming from someone who usually doesn't mind English dubbing, and it's even more surprising because Funimation is usually the best studio in this regard. Then again, I suppose you can't get every series right.

Beyond that, I don't think there's much else to say about Shonen Onmyouji. It's light, and in more ways than one. There isn't anything really substantial here, doom-and-gloom final arc aside, and it skirts the edges of the generic in what may be one-too-many times for many viewers. But it can be entertaining for what it's worth; the characters are charming, and interesting at times, and the show doesn't take itself too seriously (excepting, again, the final few episodes). If you keep that in mind, Shonen Onmyouji could turn out to be an entertaining break from the more serious outings of the genre.

Bottom Line: Light, insubstantial, and somewhat generic, Shonen Onmyouji isn't something you'd call "superb." The historical setting, while interesting, could confuse some viewers, and the sudden and abrupt change in storytelling style doesn't win it any points either. Despite all this, the show can be entertaining in its own way, with charming characters, decent humor, and an overall sense of lightheartedness.

Recommendation: If you aren't looking for something very heavy, or have an interest in Japanese history, Shonen Onmyouji may be worth checking out. Don't expect anything too remarkable, though.