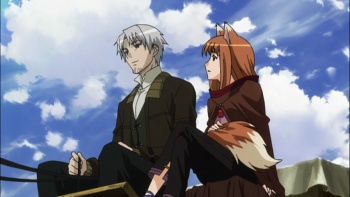 What do you suppose you get when you take late Medieval economics, sprinkle in some character drama, add a lot of snark, and throw in some fantasy elements about wolf gods? And then, just for good measure, what if you give it a name that sounds like a bad 90s pop-band? If your answer is "not a whole damn lot," well... you really should be right, but somehow, Spice and Wolf exceeds all expectations by actually being entertaining. And not at all a glaring reminder that taking that economics class was a mistake.

For those of you who didn't hit the back button the moment the word "economics" showed up, Spice and Wolf is a thirteen episode series depicting the misadventures of an ordinary traveling peddler named Lawrence and his not-so-ordinary companion, the wolf-deity-in-human-form, Holo. Lawrence first meets Holo when he finds her sleeping in the back of his cart one night, and she begs him to take her along on his travels. According to her, she came to Lawrence's country long ago and agreed to provide bountiful harvests to a small, out of the way town. Now, the town no longer needs her services thanks to advances in agricultural technology, and she wishes to return to her homeland in the north. The rest of the series chronicles Lawrence and Holo's often well-thought-out but increasingly hazardous attempts to strike it rich as traveling merchants.

Perhaps the most unique thing about Spice and Wolf is the overall focus of the series. While some anime will focus largely on action and fight scenes, and others on suspense and drama, and still others on less substantial things like... fanservice, Spice and Wolf throws a curve ball by spending quite a lot of its time on economics. This makes the series a bit obtuse at times, and while the exposition and explanations of medieval economics is usually well presented, it can also be a bit difficult to comprehend.

This is especially glaring when the characters are discussing economic strategy while other fairly important things are going on in the background. Even so, the ultimate result of this unique direction does, on the whole, tend to make sense. Or at least, I think it does. I don't know, I'm a writer, not an economist, and the concepts that are brought up are fairly complex. They at least appeared to make sense, which I suppose is the best that can be asked for.

On the other hand, the economic focus of the series does lead in to my biggest complaint: The pacing is very slow. The beginning is especially guilty of this, and as I finished the third episode I found myself saying, "I'm three episodes in and I don't even know what this show is about because nothing important is happening!" The plot picked up almost immediately afterwards, but the fact still remains that there are entire episodes in this series that seem like nothing but thin filler. And you have to keep in mind, Spice and Wolf is only thirteen episodes long!

But I've spent a lot of words on the series' flaws, so let point out one thing that really works: The dialogue between Lawrence and Holo - when they aren't spouting economic exposition - is some of the best written banter we've seen in a long time. The two characters have a unique, nuanced chemistry: both are laid back enough to take and dish out teasing, sarcasm, and friendly insults, but they aren't all snark. They each have a sort of depth to them that was nothing if not unexpected; from Lawrence's slight uneasiness and awkwardness about traveling with a deity, and Holo's subtle fear of loneliness and rejection.

I could write a lot more about the characters, but I won't bore you - suffice it to say, these elements come together in such a way that the conversations are by far the most refreshing and entertaining part of the series, and they were more than enough to overcome the more dry exposition and heavy filler that Spice and Wolf often seems to present.

Overall, Spice and Wolf tries some interesting concepts, with some that work better than others. While the focus on economics and trade is interesting at times, and certainly presents a unique direction, the inherent complexities of economics often prove to be a source of confusion for the viewer. And ultimately, I'm not completely convinced that it provides a substantial enough base to weave a story upon. On the other hand, the well written dialogue and characterizations, with a focus on wit and sarcasm, almost make the series entertaining enough to ignore its other shortcomings. I may not watch it again, but Spice and Wolf was entertaining enough to hold my attention the whole way through.

Bottom Line: Spice and Wolf isn't exceptional or groundbreaking, and frankly, many people will probably find it boring. Even so, the surprisingly refreshing dialogue and character interactions might make it worth checking out.

Recommendation: Spice and Wolf would fall firmly in my "rent, don't buy" category - if, that is, anybody actually rented shows anymore.

Josh Viel didn't actually take economics in college. Instead, he was stuck with a bunch of Philosophy classes, because apparently knowing about a bunch of dead guys with too much time on their hands is more important than knowing how to not hilariously mismanage your finances.