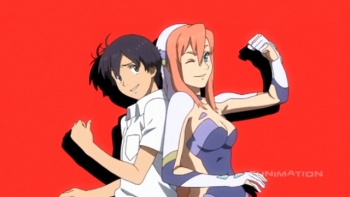 There's something about English that Japan just seems to love. I'm not exactly sure what it is about my native language that our friends over the Pacific pond seem to like so much, but if they keep giving me characters with names like "Birdy," then I don't really care. Said character is the protagonist of the 2008 anime Tetsuwan Birdy: Decode, or, in English, Birdy the Mighty: Decode. And really, how can you go wrong with a name like "Birdy the Mighty?"

We first meet Birdy as she chases down a transport ship suspected of harboring intergalactic criminals. Birdy is an investigator for an interstellar government called the Federation, and she is charged with tracking down two criminals in particular, whom stole a mysterious super-weapon known only as the "Ryunka." Unfortunately, the criminals escape from Birdy and make their way to a backwater planet on which they hope to hide - Earth.

Birdy catches up with them in an abandoned building that our second protagonist, a student named Tsutomu, just so happens to be exploring. Seeing an opening, one of the criminals tosses Tsutomu into the path of Birdy's attack, escaping and killing Tsutomu in the process. Without a body to host it, Birdy's only recourse is to transfer Tsutomu's consciousness into her own body while the student's body is repaired back on her homeworld. In the meantime, Birdy must continue her investigation and track down the Ryunka, with Tsutomu - quite literally - in tow.

Now, just knowing this basic premise from my research before watching the series, I immediately assumed that Decode was going to be one of those weird action-slapstick-comedies that I've never really been able to follow (but Japan seems to be so fond of making) with the body-sharing element as the central gimmick. Much to my surprise (and subsequent delight), however, Birdy the Mighty: Decode turned out to be almost the exact opposite: an action-drama with surprising depth and a strong story.

Perhaps the most surprising thing I discovered in Decode was just how complex a plot it has. The premise I mentioned above is fairly simple, and the writers could have left it as is and probably still manage to pull off something that was decent. Instead, they went the extra mile, taking the simple bases of the characters and setting and continually fleshing them out, adding layer after layer of complexity to the plot as it ramps up. In fact, I can scarcely recall a time in the series' thirteen episodes where I could say that absolutely nothing was being developed in regards to the plot, and yet this story density almost never seems to hamper the show because of how well these developments are woven into everything that happens. And like a good mystery novel, Decode continually foreshadows bits and pieces of the overall plot without ever giving too much away, leaving the viewer with no shortage of questions to chew on: What exactly is the Ryunka? Why was it taken to Earth? What does the Federation really want with it?

Still, there are some elements of the story that could have benefited from being a little simpler. I could have done with a few fewer villains - there seem to be at least three distinct groups of antagonists milling about at any given time, each with their own shadowy agendas, and it was difficult to get a feel on which was supposed to be the primary one until the last few episodes. On the other hand, the ending gave me the opposite feeling - for all of the complexity the plot builds before the climax, in the end, everything is wrapped up a little too tidily for my tastes, with things returning to the status quo more easily than they probably should. To be fair, both of these issues are clearly side-effects of setting-up for a second season - which has already aired in Japan - and to be perfectly honest, at this point, I'm probably just nitpicking.

As a showcase of animation, Decode is an absolute gem. Vivid colors and fluid animations permeate the series' visual spectrum, and skillful blending of CGI with traditional animation make for scenes with far more movement and activity than is usually seen in an anime. Really, I'm surprised to see animation of this quality in a series that doesn't seem to have made much of an impact in Japan. The soundtrack is of equally high quality; a blending of rock, jazz, and orchestral styles that I enjoyed so much that I just might be persuaded to purchase it, if it ever comes out on CD in the US.

Bottom Line: Overall, I enjoyed the first season of Decode quite a lot. It has good action, strong characters, a thought-provoking plot, and excellent production values. It should be interesting to see how things develop in the next season.

Recommendation: The first season of Decode won't be available on English DVD until later this summer, but it is available with Japanese subtitles for free on Funimation's channel on Youtube. So if anything I've said about this series sounds appealing, I'd definitely recommend you check it out.

Josh Viel is a little disappointed that, despite her superhuman strength and martial-arts skills, Birdy is never actually referred to as "the Mighty" in the series itself. Her actual title is "Birdy the Berserker Killer," but that just doesn't have the same ring to it, does it?