Editor's Note: We were sent two copies of Fullmetal Alchemist: Brotherhood. Given that one of our reviewers had never seen the first series and one of them loved it, we thought it would be interesting to see two different takes on the series - one brand-new judging it on its own, and one from the perspective of a fan of the original. This is Josh Viel's review of FMA: Brotherhood as someone who loved the original; Tom Tonthat gives a fresh look at the series on the next page. 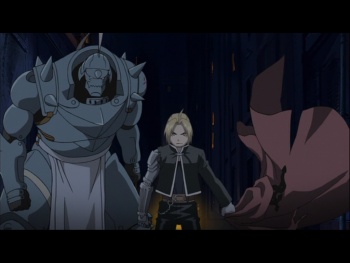 I will make no attempt to deny that the original Fullmetal Alchemist anime holds a very special place in my heart. It had deep and complex characters that broke with tradition and cliché, and had a plot that was, for the most part, masterfully paced and thoroughly enjoyable. It was primarily Fullmetal Alchemist that reinvigorated my interest in anime, an interest that later grew into a hobby and then finally to full-fledged fandom, and would eventually lead me to land a contributor position at a certain online magazine we all know and love. So it should come as no surprise to learn that I have a lot to say about its much younger, newer sibling, Fullmetal Alchemist: Brotherhood.

The most important distinction to make, in order to understand the differences between these two series, is that Brotherhood is not a sequel to Alchemist. It is an alternate continuity - of sorts. Both series draw their premise from an original Fullmetal Alchemist manga series produced by artist Hiromu Arakawa that started in 2001 and is still ongoing today. The issue - and, indeed, the whole reason why Brotherhood exists - is that the original Alchemist series began airing in 2003, long before the manga was anywhere close to concluding.

Not content to dull the series down with filler and padding so that the manga could remain a step ahead at all times - such as certain other anime series are apt to do (I'm looking at you, Naruto) - the writers at animation studio Bones decided to take what material was already in the manga and expand the story in their own direction, resulting in a series that maintained good pacing throughout and had a definitive ending to its story arc. Now, fast-forward to 2009. The manga looks to be winding up to its climax, and the first Fullmetal Alchemist anime was wildly popular and successful. This leaves Hiromu Arakawa and Bones a golden opportunity, to create a new series that follows the manga faithfully, right to the end. This is Fullmetal Alchemist: Brotherhood.

The first thing a fan of the original Alchemist will notice in Brotherhood - aside from the differences in the plot - is the change in animation style. The character designs are more in line with their depictions in the manga, which I suppose is to be expected, but it's more than that. Everything is a little more stylized: colors are a little brighter, and the shading is all a little flatter. The overall effect is animation that looks a little less detailed and pristine. I'll admit that this is a small nitpick, but it stuck out just enough that it sat at the back of my mind and bothered me all the way through, almost like a stone that was stuck in my proverbial boot.

I could go into detail about the various minor changes to the story - Lior isn't in a desert anymore, Hughes doesn't meet the Elrics until long after Ed's certification - but all of these details are fairly minor, and I would end up spending all of my time talking about what amounts to nothing. But there is one important change; a cruical difference that permeates and encompasses almost every other change that Brotherhood makes in its first season: Pacing.

The first season of Brotherhood - its first thirteen episodes - share the original Alchemist's continuity almost completely. However, in those first thirteen episodes, Brotherhood covers all of the material that Alchemist covered before diverging - reaching the equivalent of episode 30 in the original series. As a result, the enormous amount of character development in the first half of the original anime has been compressed in the best of cases and utterly discarded in others.

I will admit, however, that this is more in line with the pacing of the manga. The original series spent a great deal of time embellishing upon and adding to the events of the manga before it finally diverged. But even so, everything still felt like it was moving a bit too fast in Brotherhood. The most glaring example of this problem is the death of one particular major character. In the original Alchemist, this death felt like a sucker-punch to the gut; it was raw and emotional, and totally unexpected. But in Brotherhood, we see a lot less of this character, and his influence in the lives of others in the main cast seems diminished, largely in part because Brotherhood spends a lot less time on the events leading up to his death. With Brotherhood, this character's death fell flat to me; it lacked much of the emotional impact it had in the original series. This is just one of many examples where I found the pacing to be lacking, but they all lead to the same point: Fullmetal Alchemist: Brotherhood, at least at the start, simply moves too fast.

Now, I realize that this analysis may seem overly harsh towards Brotherhood, and I want to make it clear that I did enjoy the first thirteen episodes. It's still a good series, and it's off to a start that - if not as good as I think it could have been - is still good enough to merit attention. What will really make or break this series in my eyes - and indeed, has me quite excited - is the next thirteen episodes, because it is within these that Brotherhood will venture off into new material, telling a story that, I suspect, will be quite different from the original Alchemist series.

Bottom Line: While Fullmetal Alchemist: Brotherhood looks to be a very promising series, as far as beginnings go, the original Alchemist anime has it beat.

Recommendation: Despite my somewhat harsh attitude towards Brotherhood, it is still shaping up to be a very good series that is definitely worth a watch.

Josh Viel is a grouchy freelance writer who has a penchant for complaining about things everybody likes.