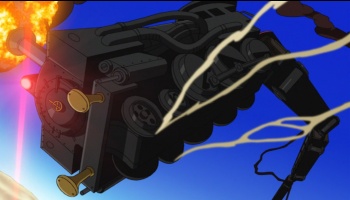 Most of the great film trilogies tend to ride the same train. The first station is where the memorable characters board the train as it travels through the unique setting that suits the story well. Those characters are then better fleshed out and the main antagonist rises to formidable power as the train leaves the second station and detours on a riskier track. Then, en route to the third station, too many extraneous characters, side plots, and an unsatisfying climatic showdown wind up derailing the main story and turns the trilogy into a train wreck.

And it looks like the third volume of Soul Eater has stowed away on that same train.

Life was simpler for Maka and everyone else at Death Weapon Meister Academy (DWMA) who was important enough to have a name. Collecting evil souls and defeating witches to prevent the rebirth of the malevolent Kishin was child's play for the weapon/meister teams in the stylish mix of action and humor. The second volume developed and later unleashed the plot to revive the Kishin conveniently located inside DWMA. But after a huge build up about his resurrection, the Kishin is out getting his skin rejuvenated at a day spa and hardly shows up during the third volume. Instead, Soul Eater throws in a brand new bunch of villains for DWMA to fight in a transition that is as smooth as train ride that gets hit by a missile.

And then Soul Eater decides to cram in even more things. A DWMA professor is slowly going mad due to the influence of the still-primarily-absent Kishin. Death sends his DWMA staff to hunt down various MacGuffins that will either assist in the war or tarnish his good reputation if discovered. The original group of villains returns when its recently deceased leader resurrects herself just because she can.

New DWMA student teams are suddenly introduced and appear more competent than the alpha DWMA students viewers grew to love during the previous volumes. Maka, Soul, and the rest of the gang have to regain their group dynamic and fighting confidence by any ways possible including a return visit from the demonic presence that was unwelcome the first time it popped up. And there is yet another visit from the pompous Excalibur, but his familiar sight is actually the most refreshing out of all the new stuff stuffed into this third volume of Soul Eater.

With so much going on in this volume of Soul Eater, hardly anything gets developed properly and all the good elements that made the series interesting are slowly getting pushed aside. The new developments feel like desperate moves to acknowledge parts of the manga, but the anime lacks enough episodes to actually develop those parts.

It is a pity that the story becomes so disconnected when everything else that made Soul Eater so recommended remains intact. The main characters maintain their unique designs and personalities. The new characters introduced fit the show well and do deserve more than a greeting and a chance to show off one cool move. The infusion of humor and action is still mixed nicely resulting in a series that does not take itself too seriously and prevents things from being overly melodramatic or a parody. The opening and ending themes are not as catchy as the previous ones but that is why DVD players have the skip button.

The English dub cast is still relatively on par with the Japanese cast with only a reversing of one newly-introduced character's initials as a slight change so that the series would not blow it with the censors. Had Soul Eater been divided into individual seasons instead of a series of interconnected volumes, I would easily just say skip this third volume until the show sorts itself out and gets back on track.

But due to how each volume is tied to its predecessor, recommending that would only result in getting lost in what's to come in Soul Eater. So for now, the best a viewer can do is make the best of the characters and hope that the series regains control during the final volume before the whole thing turns into a giant train wreck.

Bottom Line: Like a train that tries to get back on schedule after a delay, Soul Eater Vol. 3 hastily squeezes in too many side plots and characters inside without allowing them to settle in properly.

Tom Tonthat wrote this review while taking the train to his weekend getaway. He simply found the train to be more relaxing and productive than driving through traffic.