I've never liked making "Best of" or "Top #" lists, if only because I always feel that I'm leaving something off that unquestionably deserves to be on there. In 2008, we saw a ton of legitimately awesome games hit shelves, from courtroom whodunit Ace Attorney: Apollo Justice (even if the first three games were better) and perennial party-pleaser Super Smash Bros. Brawl to the behemoth that was Fallout 3.

That, and pumpkin pie.

5.) Audiosurf - I like listening to my music. I like playing music-based videogames. If only there were a way to do both at once. Hmm! Audiosurf is a creative little game that builds a course based on any song in your digital library and plunks you down to play through it. Put on some Simon & Garfunkel for a relaxed breeze of a ride, or throw on Dragonforce for a nonstop downhill rush. Me? I'll stick with the snazzy opera/rap blend of "'Libera Me' From Hell" from Gurren-Lagann for now. 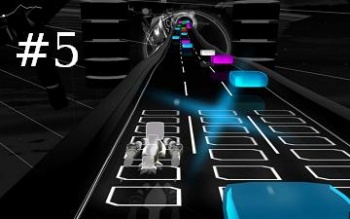 4.) Mirror's Edge - I liked Mirror's Edge as a game, but loved it for what it has the potential to do for gaming. New IP in a year filled with sequels and knockoffs? Check. Actually trying something new rather than just going with something safe and tried-and-true? Check. Sure, it's not without flaws, but more than anything else, Mirror's Edge gives me hope for the future of gaming. Also, the theme song has a tendency to worm its way inside my mind and stay put, and the 2D Flash game kicks ass.

3.) Chrono Trigger DS - Chrono Trigger has always been one of my favorite videogames of all time ever since I first played it on the Super Nintendo more than a decade ago, and no surprise - it was one of my favorite videogames of the year when I got to curl up with it on my well-worn DS. The extras are "eh," but who cares about that? It's CHRONO TRIGGER. It's still got a fun, engaging story with entertaining and lovable characters, a traditional-yet-oddly-creative battle system, and some of the greatest music ever composed for any videogame in the history of gaming. I'd call it a "timeless classic" ... but I think Susan would throw something at my head. [Puns drive me up a wall. --Susan]

2.) Professor Layton and the Curious Village - I loved the puzzles (even if those sliding block ones had me on the verge of tearing my hair out). I loved the Adventures of Tintin-esque visual aesthetic and the well-done voice acting. I loved the quirky characters and I loved trying to piece together the curiosities behind the village of St. Mystere. But most of all, I loved Professor Layton and the Curious Village because it is something more than the sum of all its parts. It is unique, it is clever, it is unabashedly whimsical, and if you told it that you loved it, it would tell you that you'd just reminded it of this smashing puzzle.

1.) World of Warcraft: Wrath of the Lich King - I don't even know how much needs to be said about this other than it makes me like Blizzard than I already did, and that's no small feat. Wrath of the Lich King sets the already high bar for MMO quality even higher, and even though - by all rights - it should feel like I've done this before, it never really does. Northrend is one of the coolest fantasy lands I've seen in ages, and I continually find myself blown away by the quality (and variety) of the new quests and dungeons and everything. Sleep is for the weak: LF2M Heroic Halls of Lightning need DPS.

Tomorrow, Jordan Deam steps up to the plate with his five picks of the year. In case you missed any of our Fave Fives, check out the full list.