It's the end of the year, and you know what that means: lists-a-plenty! We make them because it's a fun way of looking back at the past twelve months, and because they're far easier to read (and write) with an eggnog hangover than our usual more in-depth stuff.

The criteria for a game's inclusion on this list is the enjoyment I derived from playing it, nothing more, nothing less. These games aren't necessarily the "best" of their kind from this past year (though some certainly would be in the running), but they're the ones that stuck with me, long after I'd finished playing them.

Feel free to argue, discuss, or better yet, present us with your very own fab five. Pass the nog. 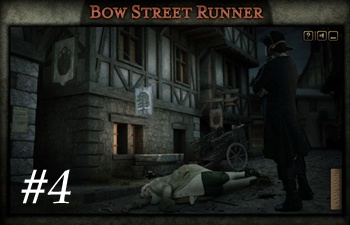 5. Hidden Secrets: The Nightmare (PC) - Casual games tend to be rather happy-go-lucky, but this collection of puzzles and minigames has a decidedly darker edge. Your husband, who may or may not be shtupping your best friend, may or may have not facilitated the tumble down the steps that landed you in the hospital with amnesia. Does it really make sense that solving puzzles somehow gets you closer to the truth? Not a bit. But the puzzles are extremely creative, varied, and challenging, and well worth putting up with the incredibly bad voice acting and lackluster artwork.

4. Bow Street Runner (PC) - This adventure game was created as a tie-in for a show on Channel 4 in the UK, but don't hold that against it. It's not terribly difficult, but it's incredibly well acted and written, making it more like interactive episodes of the show than a real game. It's also interesting simply for its historical aspect - the Bow Street Runners were London's first professional police force, and the game offers a fascinating glimpse into those rough times. Each chapter of the game can stand on its own, but they all tie together nicely in the end, so make sure you play them in order.

3. Dead Space (Xbox 360, PS3, PC) - I love to be scared, but I've watched so many scary movies and played so many scary games over the years that I've become largely immune to so-called fright fests. So when a game comes along that genuinely gives me the heebie jeebies, I rejoice. In a cringing, looking through my fingers way, of course. Yes, Dead Space was repetitious and the Ishimura didn't look like anyone ever actually lived in it, but the feeling of being trapped on a ship, with no choice but to move forward through rooms full of lurking death was palpable enough to make my palms sweat. I don't care how jaded you are, listening to a recording of a man sawing off his own legs is damned disturbing.

2. Persona 4 (PS2) - Persona 4 is certainly a well-done RPG (read my review for a more in-depth look), but the reason it is on my list, as opposed to all the other well-done RPGs that came out this year, is the delightfully bizarre creatures that lurk in its dungeons and back you up in combat. Crawling through dungeons is wildly entertaining when you can't wait to see what weirdo monster is trying to eat your face next. The Personas that help you out are just as wacko; I currently have a snake goddess, a flaming tiger (as in he's actually on fire), and a tiny samurai cat in my arsenal. How awesome is that?

1. LittleBigPlanet (PS3) - The levels in this platformer are beyond clever, and the incredibly easy-to-use level editor allows me to embrace my inner game artiste, but let's be honest, shall we? LittleBigPlanet tops my list because of Sackboy. His goofy grin brings joy to my day, and his adorable floppiness makes me giggle with unrestrained glee. When simply playing through a game's tutorial puts you in a good mood, you know you've got something special.

Tune in tomorrow for Tom Endo's five faves of 2008. In case you missed any of our Fave Fives, check out the full list.