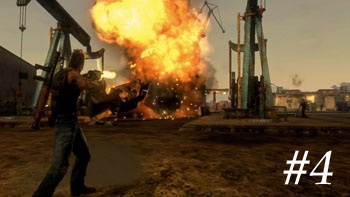 Normally, this is the time of year when I finally get around to playing all of the great games that have been stacking up next to my TV. Except this year I had to play them all when they came out so I could tell you fine folks what I thought of them. The good news is I can now write this list about what my five favorite games were this year. The bad news? I'll be playing Barbie Horse Adventures next week on my vacation. Such is life.

5.) Fallout 3 (Xbox 360, PS3, PC) - This one is a no-brainer. I've spent upwards of 100 hours on this post-apocalyptic action RPG since its release, and, having finished the game and discovered probably about 90% of its content, I expect I'll be restarting with a new character and going through all of it again. Yes, it's just that good.

I have heard complaints from some folks though that guns turn them off and that any real RPG should take place in a fantasy setting, not the brutally realistic future Earth of Fallout. These are clearly people who did not learn to fire a rifle before learning to drive a car, and who don't spend their spare time planning for the apocalypse, stockpiling canned food and iodine tablets. So they can go to hell.

When the shit hits the fan, I'll have played this game. I will be their new post-apocalyptic overlord.

4.) Mercenaries 2 (Xbox 360, PS2, PS3, PC) - After this game was delayed a couple of times, I suspected it would be released as a steaming pile of crap and would not live up to my very high expectations as a die-hard fan of the original game. Sometimes, even I can be wrong. The only reason I'm not still playing Mercenaries 2 is that the rest of the games on this list also came out this year. I look forward to finding the time to revisit this one in the future, to collect guns, bombs and money and tear across the war-torn Venezuelan countryside blowing up anything that crosses my path.

3.) Grand Theft Auto IV (Xbox 360, PS3, PC) - You're tooling around town in a stolen muscle car blaring Heart on the radio, taking in the scenery, peeling through some hard turns and looking for something interesting to do when, after about the ninth time someone calls you asking you to do something you'd really rather not do, it hits you: This game has crossed the border between play and work. It's really not fun. But if you turn off your phone and just go your own way, there's a lot of fun to be had. Kind of like life.

2.) Dead Space (Xbox 360, PS3, PC) - It's not often anymore you pick up a game with absolutely no pedigree and get a chance to discover how awesome it is. Part of that is the fact that franchises and sequels are taking over the game store shelves, and another part is that those hidden gems, the ones you don't know whether they're good or not until you play them, usually suck.

So imagine my surprise when I tried Dead Space and not only liked it, but spent the next several evenings in a darkened room playing the game with a watchful companion who dutifully squealed at all the right places. It's a great date game, it's a fun shooter and it features a telekinetic industrial saw that you can use to sever the limbs of corpses. Win!

1.) Mob Wars (PC) - Until Mafia 2 comes out, this is going to have to serve as my Mafioso fix. It doesn't hurt that it's a Facebook app I can play in my web browser with one hand while I'm busy pulling the puppet strings of The Escapist's video kingdom with the other.

It works like this: You enlist people from your Facebook friends list to join your mob. You then take jobs which pay you money which allows you to buy weapons and vehicles which allow you to do better jobs which pay more money, etc. You can even invest in real estate to get a steady, legitimate income. You can also attack other people's mobs and steal their money, and, when you level up, you can boost your stats and do even better jobs and buy more stuff.

The best part: you don't have to think about it much. If Mafia Tycoon existed, it would play like this.

In case you missed any of our Fave Fives, check out the full list.