Every video game tells a story. From Mario trying to rescue the princess to Nathan Drake uncovering ancient secrets, story and game have gone hand in hand since the minimalist days of Pong, a story about two people playing ping pong. In fact, nearly all games tell a story. Chess is about two armies battling and Go is about a struggle to acquire territory. These might not be compelling stories with deep characters and settings, but they are stories nonetheless.

If every game tells a story, then storytelling will inevitably become a part of game design, and sure enough we have been trying to tell stories with our games since the days of the Atari and the NES. Since technology was limited, we couldn't include tons of text boxes or hours of voice acting in early games, so instead we had to tell story through game mechanics, much like Chess does. 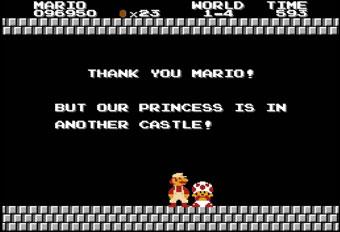 For example, we knew Mario was the protagonist of Super Mario Brothers because he was the sprite that moved when we pressed buttons. We knew that Goombas and Koopas were enemies because Mario died when he touched them. We knew Bowser was the main antagonist because he showed up at the end of every world. The one piece of narration we got, that clued us in to our main quest, appeared after we triumphed over Bowser: "Your princess is in another castle." Well, it looks like we are trying to save a princess then!

This is how videogames evolved for much of their early years. Mechanics and narrative went hand in hand, much like they did in pre-videogame times. Story was inferred rather than flat out exposited and if there was any exposition to be given, it was minimal or shoved in the manual.

Where to Build the Fourth Wall

I wouldn't call early video games perfectly analogous to games like Chess. In chess, you are a commander of an army, trying to out think an opposing army. You are a character in the narrative, a piece of the game world. Player, mechanics, and narrative were all playing together.
But video games separated the player from the game world with a shiny glass screen, the video game version of the theatrical fourth wall. The player wasn't a character or a protagonist. Mario was. The player wasn't trying to save a princess. He was reaching into the universe to guide Mario to do so.

This power the player held over Mario was never explained. It existed outside of the narrative, a fiat to allow game control to be possible. It didn't need to be explained. As an audience, we were largely OK with this. We looked at video game protagonists as our avatars, a separate entity from us that carried our will. We experienced the game universe vicariously through them, and that was how we got our story, our narrative, even if it wasn't happening to us.

Eventually our technology advanced and our ability to tell stories advanced along with it. Increased data storage capabilities let us cram more text into boxes. Better sound cards allowed us to include voice acting, no matter how horrible. Stronger sprite engines, the introduction of 3D polygonal space, and full motion video allowed us to craft cutscenes to further elaborate what was taking place in the game world.

But as we gained all this wonderful graphical, audio, and processing ability, we lost something else. Namely, the gaps we filled with our imagination. Video game stories became less inferred and more directly exposited. The way characters sounded and looked were once decided by us, the player, giving us a tenuous connection to our avatars. These aspects were not fully in control of the game designer. It further reinforced the fourth wall between us and the game. 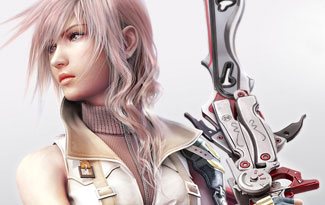 This wasn't necessarily a bad thing. Being able to tell stories more intricately also allowed us to increase narrative complexity. Look at the original Final Fantasy. The story was basically "hey four guys are heroes, go do hero stuff." It never even explained why you were heroes or why the villain was a villain or really anything beyond subtle hints poking at you to make you go in the right direction and speak with the right person. But more modern day Final Fantasy titles, despite their perceived quality, manage to craft entire cities, worlds, peoples. We get to see backstories in flashbacks set to orchestrated music. That's undeniably better than having the same NPC say "Welcome to Corneria," a million times.

Breaking the Barriers of Expectation

As I said before, separating different aspects of a video game with metaphorical "walls" is not necessarily a negative thing. Some of the best games of all time were made with this two wall formula. For example, Chrono Trigger was made with walls all around it, and was still one of the best video games of all time. The player did not exist in the game world and controlled characters that were distinct from them. The gameplay of choosing attacks from menus was detached from what was actually happening on screen and did little to convey the narrative of fighting against a giant green time traveling space porcupine. Yet it is still fun and is undeniably one of our great gaming works of art.

As more and more good games were made this way, we came to accept it as the gaming norm. But the cool thing about something becoming a norm, is that breaking that norm can provide a unique gameplay experience. So developers decided that they were going to start poking holes through the fourth and fifth wall.

Metal Gear Solid's Psycho Mantis is probably one of the most notable examples of a game leaking through the fourth wall into the real world. Not only did the data on your memory card affect his dialogue, but you had to change controller ports just to be able to beat him. Suddenly, your actions outside the game world affected the game world, which created a phenomenal feeling of immersion, even though you, the player, were never really an entity in the game world.

Certain games flirted with addressing the player directly. Spec Ops: The Line was one of these games. While all the action in the game was directed toward the character, Walker, it was supposed to feel wrong. The game pointed out how ludicrous action set-pieces were compared to real warfare, and by the end of the game, the dialogue directed at Walker served a double purpose of addressing the player. The player was asked to consider their morality, and their motivations for continuing to commit atrocities instead of simply quitting the game are highlighted as flawed at best and psychotic at worst. It was a fantastic way to spin a narrative, and yet the player was still not an in-game entity. Instead the game was used to start a conversation with the player outside of game space.

Countless games also poked holes in the barrier between game and narrative. Certain missions in Tactics Ogre would change the path you were on depending on who died in battle. Fire Emblem does something similar with its permadeath mechanics. The Banner Saga would change its story around not only who lived and who died, but how you managed your resources. But these games too kept the player separate from the game world.

While all of these games pushed forward video game storytelling, it could be argued that they still didn't connect player, game world, and mechanics as much as a simple game of chess did. Obviously, the narratives in modern day video games were far more complex than Chess, and it's possible that sufficiently complex narratives simply give up a level of immersion for the sake of their more complex story. No one would be sad making that trade.

But some games went even further.