Rarely, a game would come along that would reach all the way through both walls and tug you into its universe. The first game I played that did this was Earthbound, a much loved cult classic RPG from the SNES days. During the game, you control a band of kids who are going up against a cthuloid alien entity from beyond time (and yes, Earthbound fans, I know that's a gross simplification of the plot, but it gets the point across for the purposes of this article.) 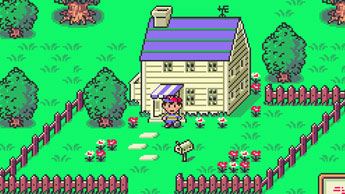 When you finally make it through the game and face off against this immortal formless being, nothing you can do is able to hurt it. All your powerful psychic attacks and legendary weapons can do nothing against something that is essentially a god. So you do the only thing you can think of. You pray for help, which actually seems to hurt the creature. (Once again I know there is a long and involved plot explanation here stemming back to the events of Earthbound Beginnings, but once again I am keeping it simple for brevity's sake.)

You pray to all your friends, family, and allies. You reach out to every single NPC the game has to offer. They all offer up their prayers to you and... nothing happens. Praying doesn't work anymore and, once again, it seems as if you simply cannot defeat an immortal primordial being of darkness just with four kids and willpower. But if you continue to pray, something interesting happens. The characters in the game reach out to someone else. They reach out to you, the player. They call out your name. At this point you have forgotten that way back near the middle of the game you were inexplicably asked to put your real name into the game during a mysterious phone call, so it feels like the prayer is coming out of nowhere. They reach out for you, and you as the player feel a desire to see them succeed. And then, all of the sudden, with an animation reminiscent of turning off a television, the heroes win.

This brought up a ton of questions that are still debated today in Earthbound communities. Who are you in the game? How did you help the kids? Did you "turn off the game" to defeat an otherwise unbeatable enemy? Are you some kind of god on the scale of the final boss? What is the "real world?" These questions linger because Earthbound managed to do something few other games could. It broke the fourth wall, and made you a part of its game world.

While you and Ness were too different people, much as you and your King are two different entities in Chess, you existed in the same universe, and you were both important to the narrative. The real world and the game world became one and the same for a brief instant.

Mr. Goombahchev, TEAR DOWN THIS WALL

Many more games started experimenting with breaking the walls between player and game and game and narrative, and they weren't all good. Baten Kaitos put the player in the role of an ancient deity, but that couldn't forgive its strange battle system and cardboard tube voice acting.
But the ones that were good were amazing. Many of you may remember The Stanley Parable, which puts you in the seat of Stanley and breaks the fourth wall by having a narrator which you can defy. Who you are and what your exact role is in the game universe is unclear but the fact that you were a very real entity in the game universe was unmistakable.

The recently released Pony Island puts you in the position of a lost soul in hell, being tortured by a poorly made computer game, but then turns around and started to suggest that you, the player, are that lost soul, and the game you are playing right now is that torturous game.

And of course, I would be doing a disservice if I didn't mention Undertale, which also brings in the player as an in-game entity that has a scary power over the in-game universe. The power to save, load, and otherwise overwrite the game's timeline.

These games create a sense of immersion that few other games can. Since both walls are destroyed, once again mechanics are having an effect on narrative, but since our games are far more complex, the poignancy of these mechanics become more complex as well. In Chess, the most you could do was move a piece, representing a member of an army moving. In modern day games, saving and loading become strange and dangerous time powers. Closing the game could be an enemy attack, and deleting a game could be an attack that you make against a powerful enemy invading your computer. Simply choosing not to play can be considered an in-game action because you, the player, are a part of the game universe.

A Future Without Walls

As technology continues to advance, we continue to try and find ways to make the barriers between game world and real world disappear. 3D technology was the buzzword a few years ago, allowing real world depth to be brought to an in-game world. Now, virtual reality is all the rage with the Oculus Rift releasing soon, promising to put you inside the game world.

If we can now graphically immerse a player in a game world, it's also important to know how to immerse them narratively.

If we can now graphically immerse a player in a game world, it's also important to know how to immerse them narratively. Wouldn't it be kind of strange if you were able to experience a game world and yet, the character that people refer to isn't you? I'm not talking about the character itself being someone who doesn't share your body or history. Of course it's fun to roleplay as different mystical creatures and I certainly won't judge you for wanting to step into the shoes of an orc.

But still, that orc IS you. It has your motivations. Wouldn't it be strange and kind of disconnecting if, in a virtual world, characters treat you as if you have a mind and motivations that simply aren't your own? In a way, games like this are practice for an era of gaming where the character's eyes will be our eyes, and their actions will be our actions.

Some players are not going to want this sort of immersion. It can be argued that making you part of a game world is inherently emotionally manipulative. Asking you to take responsibility for what happens to imaginary characters may go against the idea of games being used as escapism. Not everyone is going to want their real world actions to matter in a game world, considering our real world actions matter so much in... what's that thing called... real life. Being forced to stress out over deleting a game from your computer may simply not be healthy for some people.

But the game industry, as a whole, has always been trying to find more ways to put you right inside the game action. Everything from the growth of the open world genre, to the creation of voice and motion controls, has been in service of trying to bring you and the game closer together. If we can produce this effect, simply by changing the way we write and design games, then I say we should do it.

So I personally hope that in the future, some AAA studio attempts to make a game where you, the player, are an important part of the in-game universe. Until then, there's always these strange and meta indie-game hits.