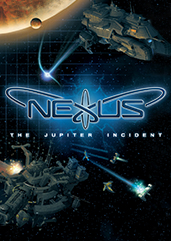 Originally released in 2004, Nexus: The Jupiter Incident drops players into the commander's chair and tasks them with guiding their fleets to victory in an interstellar conflict involving alien races, sentient machines and, of course, big, flashy explosions.

One of my favorite games is Homeworld and one of my favorite things to do in it is to load up a multiplayer match against a couple of AI commanders and then try to take them down with limited resources. I'll build a carrier, a handful of frigates, and a few squadrons of fighters and bombers and then that's all I'll allow myself. If I lose a fighter, I won't replace it. I have what I have and when my forces dwindle down to nothing that's it. Suffice it to say that this is a challenge I don't usually win at.

Nonetheless, going into Nexus: The Jupiter Incident, I was excited in no small part because what I'd heard about the game pointed to it pretty much being exactly that. You're given a mission and a set fleet of ships to complete it. In fact, in the strictest terms, Nexus is exactly what I hoped it would be. It's a brutal, uncompromising experience that frequently forces you to think outside the box to win. The problem is that it perhaps expects you to think too far outside the box at times.

To be sure, it's not that I don't like a challenge. In fact, when I look at the games I love the most, a good number of them tend to fall on the punishing side. That being the case, they don't earn my affections by being hard. What makes me love them are the ways they allow me to deal with the difficulty that defines them. ArmA: Cold War Assault, for example, chewed me up and spit me out like a shopping mall gum ball, but it also gave me the freedom to deal with its trials in ways that worked for me. Likewise, Master of Orion 2 walloped me something fierce, but it also provided a myriad of options to experiment and adapt. Even just looking at my Battlestar Galactica impression sessions in Homeworld, they were hard, but they were also possible because of the flexibility that's inherently built into the game.

By comparison, Nexus frequently left me feeling like I had no options. The game was hard, but it was a difficulty that felt as though it was born less from powerful enemies as it did from the developer expecting the player to figure specific solutions to problems that were otherwise unsolvable.

In one early mission, for instance, you're tasked with holding off the enemy for ten minutes while a fleet of cargo ships charges their jump drives. I spent a solid hour and a half trying to make it through those ten minutes. The enemy ships would arrive and I wouldn't even come close to breaking their shields. I launched fighters and they'd get smacked down. I partnered up with my AI ally, focusing my attacks on his targets and we were still blown out of the sky. I tried going after the enemy mothership, thinking that destroying it might be the key and was rewarded with a defeat that was swift almost to the point of embarrassment. Clueless as to what to do and facing an evening where I would be making no progress in the game at all, I caved in and found an FAQ that explained that I was simply bringing the wrong guns to the mission. I re-equipped my ship with some shield breaking laser cannons and had the mission beaten on my next try.

The game never gave a hint that this might be what I needed to do. It basically just ran on the assumption that I'd know what to do even though none of the missions prior had required me to shift around my weapons that way. And, while in the grand scheme that might not seem too bad, it only got worse the further I advanced into the game. I'd start a mission, get my butt handed to me and then have to go back and play through a couple more rounds of trial and error until I'd finally figure out the incredibly specific tactic I needed to beat the level. It just frequently felt less like a game of strategy and more like a puzzle where I was stuck cramming random pieces together until I finally assembled something resembling the strategy the developers put in place to let me win. Add in the fact that ship movement and combat is a tad on the slow side and you have a recipe for a game that can be both frustrating and time consuming without nearly the sort of payoff that can make those negatives worthwhile.

It's a shame too because Nexus does pretty much everything else right.It looks great and has some really cool ship designs. The story, while perhaps a touch too convoluted, is decently written and interesting enough to care about. And the combat, especially in the game's best moments, is engaging and layered.

A lot of this comes from the level of control the game gives over your units. In addition to letting you customize your ships' various subsystems, the game also gives you almost total control over each of your vessels. You can, of course, just direct your ships as you would in any other strategy game; selecting a unit and pointing them where you want things to die. That said, if you want to go deeper (and you will), you can manually direct almost every single component on a ship.

Say, for instance, you have a ship with four weapons. If you want to, you can command each of that ship's guns to fire on a unique individual target. Or, maybe, you find yourself in a spot where one weapon is more important than the others. With a few mouse clicks you can manually shut your other armaments down to reroute the power to your gun of choice. Simply put, you can micromanage your vessels in ways that makes other strategy titles look downright simple in comparison.

The complexity of the control options does have the side effect of making the controls themselves a tad overcomplicated. It doesn't help that, after a point, the game tends to stop telling you how new things work and starts expecting you to figure things out on your own. In fact, I can't help but wonder if my frustrations with it would have been so severe if it had just done a bit better explaining how things work. I'm not a fan of excessive tutorials, but an extra nudge here and there might have been all the Nexus needed to be more fun.

It's a shame because when the right gears are spinning Nexus is an honest-to-Odin blast to play. In the end however, the game's rigid structure just drained too much of the fun away for me to enjoy it. If the missions had just offered even a few more options or, in the least, had been better geared towards the try-until-you-win problem solving it too often employs, then I would probably be raving about it. Unfortunately, Nexus: The Jupiter Incident feels to me like an acquired taste at best. There are people out there who will undoubtedly love this game. If you're reading this and thinking you might be one of them, then head over to GOG and give it a try. Otherwise, you might just be better off waiting for Homeworld Remastered to launch later this year.

Come back next week to catch my review of the Origin classic Strike Commander!