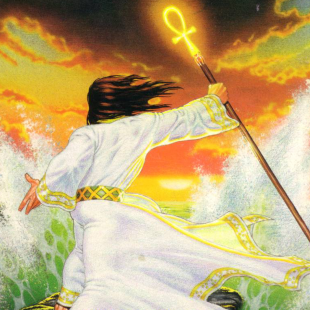 We wrap up our December of classic RPGs with Richard Garriott's genre classic Ultima IV.

In the pantheon of great RPGs, you'd be hard-pressed to find a game as revered as Ultima IV: Quest of the Avatar. The brainchild of Richard "Lord British" Garriott, it presented players with a wide world and a goal that's still fairly unique among RPGs. You weren't on a quest to take down some big bad or stop some ultimate evil. Rather, your goal was to transform yourself into the Avatar, an exemplar of noble virtues that could stand as a living example of how people should lead their lives.

It's a concept that very much appealed to me as I took my first steps into the game. Just generally, I like role playing. I'm the guy at your tabletop game who's less concerned with optimizing my stats as I am with making sure my actions are consistent with my character's history, personality and goals. Ultima IV, in turn, is pretty much all about that. You're given a set of virtues and, if you want to beat the game, you'll need to uphold them by behaving in a manner reflective of their standards. Some of the things you'll need to do are fairly simple. Mastering the virtue of Compassion, for instance, requires you to be charitable with your gold when you run into beggars. Humility, likewise, pretty much just entails not bragging about how awesome you are when NPCs give you the opportunity to do so.

Other virtues, meanwhile, call for some deeper sacrifices on the part of the player. Justice, for instance, requires you to avoid killing enemies whenever you can. Taken at face value, this sounds easy. Enemies will frequently run away from you after you deal them enough damage in combat. Being just simply means letting them get away. The problem this can pose is that by allowing enemies to flee, you're also missing out on valuable experience points that your party needs to level up.

Letting enemies run away, in turn, can be frustrating and inconvenient, but that's kind of the point. Most videogames play pretty fast and loose with the rules of morality when it comes to gameplay. Nathan Drake can gun down hundreds of people in every Uncharted game, for instance, but he's still considered to be the good guy because he's charming, funny and has nice hair. Ultima IV, comparatively, takes the rare step of making heroism appropriately costly and calling you on behavior that, when you get down to it, is evil.

That said, Ultima IV's virtues aren't perfect. While they do add a layer of moral complexity often absent from the mechanics of most other titles, they're still a bit simple when taken on the whole. It can be very easy, once you've figured out how each one works, to integrate them into your routine the way you would any other mechanic in a videogame. The virtues eventually feel less like a moral expense and more like the price of doing business. You may have to adjust habits and behavior from what other games have taught you, but really, what else are you going to do? The whole point of the game is proving yourself to be the good-est goodie that ever gooded. Doing anything contrary would just slow you down.

And trust me you'll have enough working against you already. It's not that Ultima IV is an especially difficult game. In fact, I was surprised by how easy I often found its combat. That said, it definitely punishes you if you fail to prepare. Status effects, for instance, are absolute murder. In the entire time I spent playing Ultima IV I can recall maybe one or two occasions that I was taken down by actual enemy attacks. Comparatively, my party was probably killed by poison at least a dozen times if not more.

I learned very quickly that trying to forge ahead without the means to deal with these sorts of dangers was a quick way to get nowhere. Actually equipping yourself to handle all of these various threats however, tends to expose some of the clunkier parts of its experience. For instance, if you want to relieve yourself of poisoning while you're out in the field, you'll need a mage to cast Cure. The mage part in my case wasn't a problem. Somehow, despite my generally avoiding magic classes in every RPG I've ever played, the tarot card character creation process pegged me as a spellcaster. That not being an obstacle however, did nothing to save me from the tedium of having to mix up each individual spell one by one.

I should preface, of course, that once you know the recipe for a spell, it takes maybe all of two seconds to mix up a spell. That said, with "magical herbs" only being available in a few isolated cities, you're going to want to prepare a lot of them up in advance to bring with you. Imagine, in turn, visiting an ingredients supplier and then having to sit there tediously mixing ninety-nine of every useful spell in the game. Granted, it probably only takes ten to twenty minutes total depending on how thorough you want to be with your spell supply. It's also ten to twenty minutes, however, that you wouldn't have to waste if there had been a "how many" option included in the mixing process.

The clunk extends to other parts of the game as well. Combat, for its part, isn't altogether too complicated. When a battle starts your guys and the bad guys will be facing each other down on opposite ends of a small map. You then move your units around tactical-style and trade blows/spells with your opponents until one side dies or runs. That being the case, each of your characters can only make one move during their turn and if you press the wrong action key, you can kiss that turn good-bye. It's really easy to do, especially when you get into a rhythm, which will happen as some of the lengthier battles drag on.

Surprisingly, the things that I thought would be most problematic for me were some of the biggest non-issues. The lack of a quest journal and objective markers, for instance, never really phased me. I learned to take notes and that was that. I also didn't think, going into the game, that I would enjoy the dialogue system. Unlike most present-day RPGs where conversation is menu based, you type out your speech in Ultima IV. In some ways this is limiting. Most of what you say, for instance, will never exceed a single word. That said, in many ways I felt more engaged with this kind of dialogue than I often do in more modern systems.

A part of this definitely comes from the fact that talking to people in Ultima IV simply requires a bit more attention and thought. You'll have a few basic phrases you can feed people (name, job, join), but finding out what they know means looking over their responses and finding key words and subjects that you can inquire about further. Sometimes this will just lead you to a bit of filler text or exposition. Other times, however, NPCs will reveal information about the world that you can use to press forward in your quest. The village drunk might just seem like some amusing degenerate wandering around town, but you'd be surprised to find how much a little experimentation (and rum) can get out of him.

That's something that holds true throughout the rest of the game as well, especially the dungeons. The first one I beat for instance, the dungeon of Despise, took me a good seven or eight tries before I finally finished it. The problem wasn't that it was overly hard (despite those stupid goblins stealing all of my food), rather it was just that I couldn't figure out where the heck to go. I had been through every floor and checked every door but the all important magic stone I needed to find was nowhere to be found.

Then, on my final successful attempt, I was trudging through a familiar room when I noticed something different. On a tiny section of the wall there were a few extra pixels breaking up the usual pattern. Curious I moved one of my party members to it and discovered I could step on it. Searching the rest the room I found another identical spot and, using a second character, revealed a hidden passageway leading to my goal. For a moment I was annoyed, thinking that this was kind of cheap. Then I considered the rest of the game and realized that if I had just paying a bit more attention, I probably would have found those switches three hours earlier.

If that kind of experience sounds appealing you're in luck. Ultima IV is available at GOG as a free download. It can also be purchased along with Ultima V and VI as part of a three pack, which I'm told is very much worth it. Even if this experience doesn't sound like your idea of a grand old time though, I'd still suggest giving it a go. There are old school elements that take some getting used to and it can be a bit grindy at times, but it's still an engrossing RPG that boasts a unique concept and a vast and interesting world. Despite its flaws Ultima IV had me hooked for weeks, often to the point that I was leaving other modern games dusty in their cases.

We're going to hit the ground running in 2014 with a new month full of retro goodness. Get ready for Sid Meier month and Ian Davis's review of Alpha Centauri!