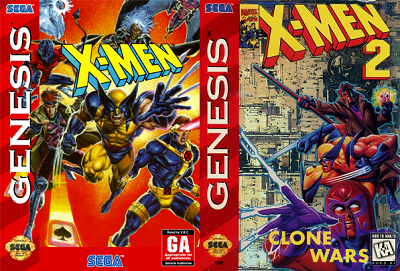 X-Men and X-Men 2: Clone Wars take Marvel's mutants and transform their world into a pair of Genesis sidescrolling adventures filled with all the comic content you could ever want. Whether or not they're actually good, of course, is a different question.

I'm going to put it right out there that, in my opinion, the X-Men are probably the coolest superhero team there is. I'm sure there will be some who disagree. The world of comics is a big place after all and even in the Marvel Universe itself there's some stiff competition. As nifty as the likes of the Avengers can be, however, they've never been able to hit that same note that's transformed the X-Men into my go-to comic books franchise.

And while I'd definitely grant a sizable chunk of the X-Men's appeal to their great stories and the all too relate-able themes of prejudice and social ostracization, I'd be lying if I didn't admit that a large part of my love (at least when I was a kid) came from all the awesome powers they got to play around with. Suffice it to say that when you're a twiggy, clumsy nerd desperately wishing to be even just a smidgen cooler, the idea of waking up one day with genetically gifted superpowers seems like, pretty much, the greatest thing ever. In the least, I remember thinking that all the team's various superpowers would make a great video game.

It's a theory that more than a few developers have obviously agreed with. All told (and including Wolverine-centric titles) there have been more than thirty X-Men games released over the past 25 years, and out of all those I've always had a hankering to devote some solid time to X-Men and X-Men 2: Clone Wars for the Sega Genesis.

Right off the bat, I'm going to say that the first game hasn't aged all that well. This was disappointing because it's a game I've heard a lot gamers wax nostalgic over. Granted, a lot of this has to do with this one infamous spot where advancing requires you to push the reset button on your console in the real world. Sadly, as much as I'd love to report that I had a grand old time finally getting to fully explore this famous sidescroller, my general impression was one of disappointment.

It's not that it's necessarily a bad game, mind you. It's simply one that shows the weight of its years. It was originally released in 1993 and, while everything does work on a basic level, it does so under a sheet of clunk that pretty much covers the entirety of the game. Character's move too slowly, jumping isn't accurate enough and your attacks are, for the most part, fairly unimpressive. 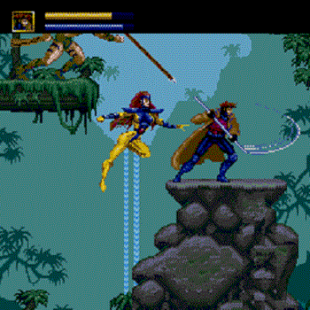 I was also surprised about how much I found myself disliking the visuals. I am, in general, a big proponent of the whole "graphics don't make the game" shtick. That said, as I played the game, I was constantly struck by how unnatural everything looked. It felt like my character was sliding rather than walking and the animations employed by the jumps and attacks were abrupt and simplistic. Now I'll admit that the problem could just be me. Maybe I've been spoiled by the X-Men in other mediums. That said, even in the static imagery of the comic books there's a sense of agility and motion to the action. The game never left me with that impression and it, sadly, affected my fun.

Far more troublesome than that, however, is the game's treatment of superpowers. More specifically, they run out too quickly to use them all that much. Granted, this does vary depending on which character you play and your powers can be restored gradually with a bit of patient waiting or by finding a power-up. Even so, I spent the bulk of the game punching my way through my foes.

Thematically this posed some problems for me. After all, these are the X-Men. Putting even a moderate cap on their mutant abilities pretty much misses the point. More than that though, the game just becomes significantly more frustrating when your powers expire. Not that I'm one to turn down a challenge mind you. I'm just not a fan of struggling to beat the same maze-like level over and over again and having my efforts slapped down because my enemies have laser rifles and I'm stuck with my puny pathetic fists.

Happily, this was one of the many things that X-Men 2: Clone Wars fixed. Released two years after X-Men, Clone Wars is pretty much the exemplar of what a sequel should be; taking the essential elements of its predecessor and refining them to create something vastly more fun. Sincerely, while I'm sure I could nitpick some complaints about this game (the music is a tad lackluster), Clone Wars is probably one of the most enjoyable sidescrollers I've ever played. 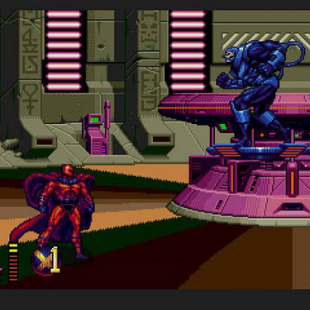 And it's not just that it's a solid game either. By all means, it's a great 2D action title. Its levels are well designed, its enemies diverse and its difficulty well-balanced. That said, what makes it really special is just how well it handles the X-Men themselves and the integration of their mutant abilities. Whereas its predecessor treats powers like a spendable commodity, Clone Wars employs them as something the characters can just innately do. Cyclops can shoot as many eye lasers as he wants because that's what happens when he opens his eyes without protection. They don't stop working because some arbitrary blue bar has run out.

It also helps that Clone Wars goes the extra mile to make sure that all your mutant abilities are integrated in such a way that each character feels at least mildly unique. I can't even begin to describe how big a step up this is from the previous game where, except for their powers, the playable characters are pretty much identical. In Clone Wars, switching between characters can require the mastery of entirely different strategies and skill sets that make for a lot of fun experimentation.

Stacked on top of these improvements is an almost equally impressive boost to its looks. The pixel art in Clone Wars is flat out gorgeous, combining dynamic, colorful environments with sprites that are larger, more detailed and smoother move with exactly the sort of emotive motion I was missing in the original game. Running, jumping, fighting; Clone Wars adds a delightful fluidity to the visuals that was sorely missing in the first game.

What it all adds up to is a game that does a great job of translating the X-Men and their world into gameplay that I was able to happily play for hours and could imagine getting lost in for hours more. The original Genesis X-Men is, at best, a serviceable. X-Men 2: Clone Wars meanwhile is outright excellent and well worth your time if you happen to have a Genesis lying around.

Next week, I return to the realm of PC role-playing with the classic game Lords of Midnight. In the mean time, feel free to PM me your comments and suggestions for future Good Old Reviews. Let me know if there are any other old X-Men games that I should try out!