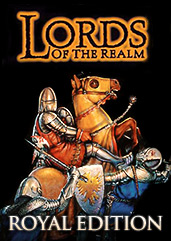 Lords of the Realm is an early-90s strategy game that pits the player against rival lords vying for the throne of England. You'll raise armies, fight battles and conquer counties, but only if your pesky peasants let you.

My army is doomed. It's a sour realization that frustrates me, in no small part, because I have only myself to blame. I let myself become convinced of my own invincibility; looking at my victories over the Knight and the Countess and attributing them to some innate skill as a leader that clearly wasn't real. Now, the armies of the Earl are closing in and my tired men are just too weak to take them on.

I mull over my choices, few as they are. I can't retreat; the Earl has cut off any path leading back to my own territories. The only direction my men can march is deeper into his lands where more foes await. The only other option I can think of is to raise another army and rush it to the front. I don't have the resources to produce the top tier force I need to defeat the Earl, but I can perhaps weaken him enough to give my veteran troops a better chance.

It's only reality that stops me from doing this. Most of my territories are recently conquered and are either too weak or too politically tumultuous to supply the men that I need. The only way I can field the force for this plan will be to conscript the peasantry of my home county, which has already born most of the costs of my conquest. If I impose upon them again, I might find myself with a revolt on my hands. Not willing to risk my powerbase, I face the Earl's army with what I have and, as expected, I lose. A sigh escapes my lips as the last man falls, but I accept it. This is simply the way of things in Lords of the Realm.

Originally released in 1994, Lords of the Realm could very well be one of the most entertaining games set in the medieval world that I've ever played. I'll grant, of course, that at least a portion of my enjoyment is the setting. Give me a game taking place or inspired by medieval Europe and I'll be pretty much guaranteed to enjoy it at least a little bit. Beyond my love of its setting though, Lords of the Realm impressed me both with how it balanced its many elements and, perhaps even more so, just how well it's held up after 20 years.

Sincerely, this is a game that could have been released today and I'm fairly certain it would still find fans. It simply excels at selling the experience of being a medieval lord, especially in the way it empowers you while still limiting what you can do. This isn't a Total War game where the focus is only on producing gigantic armies to fight in spectacular battles. You're as beholden to the whims of your peasants as they are to you and you need to do everything you can to manage their moods and desires so they're willing to take up arms when you decide to go a-conquering.

On the level of actual, turn-to-turn gameplay, this can admittedly be a bit tedious. You'll spend a tad too much time manually shifting your peasants around to meet the various needs of the seasonal farming cycle, something that's only exacerbated as you take over more counties. On the larger scale though, I really loved the sense of consequence this aspect added to the game. As in the scenario I described at the beginning of this review, there are moments where your domestic policies can have a huge effect, both positive and negative, on your grander goals. I was forced to become incredibly aware of my limitations and make decisions about my strategy and the way I was employing my resources in ways that another game might have left me freer to ignore. Simply put, the game is as much about governing as it is about war.

Not that the war game is negligible. In fact, I was genuinely surprised at how engaging I found Lords of the Realm in this regard. To be sure, battles are a bit more simplistic than in some more modern games. Even so, they possess enough strategic depth that you can't just bludgeon your way to victory. The sheer amount of effort you need to put into building a competent army also lends a natural potency to your victories and defeats. The game smartly makes equipping anything besides a basic troop of pitchfork wielding peasants a royal pain in the ass. Building your own weapons and armor requires iron that you'll either need to mine or buy from merchants who sell it at a premium. In other words, when you have the goods you need to deck your troops out with actual weapons and armor, you're not going to want to waste it.

The only part of the combat that I found lacking was the siege warfare. Don't get me wrong, I enjoyed designing and building my own castles. Who wouldn't? Actually employing them in battle, however, is sadly dull. Granted, it's not like the clashing of the game's pixelated armies is the most thrilling thing in the world to watch. That said, it's a hell of a lot more entertaining than minimalist battles waged in siege mode where most of the action plays out via text. Maybe it's my own fault for going in with expectations that were a bit too high. I'd never heard much about Lords of the Realm prior to playing it and, after watching army battles play out, I was expecting a fun fight with my itty-bitty soldiers climbing teeny tiny ladders and what-not. It was disappointing to have it be less than that.

Even with that let down, however, Lords of the Realm is a stellar strategy game that's more than worth the $5.99 that GOG is asking for it (and Lords of the Realm 2). It can have moments where things feel a bit too slow, but overall it's a fantastic experience that fans of the genre would be remiss to skip over. Let me sum it up for you this way. As I write this, I'm gearing up to play Wing Commander: Privateer, one of the most beloved entries in one of my favorite franchises. As appealing as that sounds, there's still a big part of me that would prefer to do nothing more than spend another week organizing the year's harvest and leading my armies into battle across the English countryside.

Come back next week for my review of Wing Commander: Privateer and, as always, feel free to PM me comments and suggestions for future Good Old Reviews!