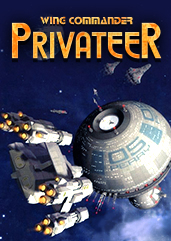 Released in 1993, Wing Commander: Privateer drops players into the shoes of a freelancing spacer trying to fly, fight and trade their way through a harsh universe full of hostile forces and violent aliens that you befriend or blow out of the sky.

I don't like Wing Commander: Privateer as much as I did Wing Commander 2. Not that I was necessarily expecting to. When you get right down to it, there's just too much nostalgic bias on my part for me to see any other entry in the franchise as anything but subpar when compared to that classic of my childhood. Even so, as I leave Wing Commander: Privateer behind me, I can't help but feel that there are some genuine deficits that kept me from enjoying it as much as years of echoed acclaim had led me to believe I would.

A big part of it was definitely the story, which is far less a part of the game than I would have liked. While some have certainly criticized the Wing Commander games for being a tad overly focused on plot at times, I'm one of the people who has enjoyed that arguable imbalance. Privateer, comparatively, does have a story, but you can play for hours without even stumbling on its beginnings. And even after it started, I had to say that I found it to be far less interesting than what I was used to from the rest of the franchise. Maybe it's just me, but the search for an alien drone was less engaging than the drama of an interstellar war with a hostile race of Tony the Tigers. Unfortunately, my disinterest in the story had the effect of exposing just how dependent I am on the narrative of Wing Commander to be able to enjoy it.

As silly as it probably sounds, the role and mindset that a game places me in is probably one of the biggest factors that determines if I like it. This isn't a new thing for me either. Even when I was no older than five or six I had a distinct disinterest in most things to do with Super Mario, but couldn't get enough of The Legend of Zelda. What was the difference? One stars a goofy plumber who punches bricks while the other gives you a sword and sends you on dungeon-delving quest to save the world.

For all their flaws, the mainline Wing Commander games hooked me by dropping me into the shoes of a hero that I found innately interesting. In Wing Commander 1 you're the rookie trying to prove themselves. In Wing Commander 2 you're a disgraced pilot trying to prove their innocence in the midst of a war that is going poorly. Playing as that person and in those roles motivated me. It made me want to kick more ass and see what came next. Playing as some guy trying to make a buck while searching for a random space object, just didn't do it for me.

Not that I can't enjoy a game for gameplay's sake, mind you. The problem is that without a story to help make up for some of its lesser features, I couldn't help but be bothered by Privateer in ways I might have otherwise cared less about. The controls, for instance, are very much on the clunky end of the scale. Granted, I've always played the Wing Commander games with a keyboard which, from what I've heard, is the worst way to do it. That said, it's what I've always been most comfortable with and the gameplay's general stiffness just troubled me more than it has in my past experiences with the franchise. Likewise, the game's repetition (Take mission. Fly nav points. Blow stuff up. Repeat.) It felt much more grindy to me this time around, as did the game's moments of frustration.

Say what you want about the same-y missions and unfair difficulty in Wing Commander 2, most of its missions at least had the decency to be short enough that bursting in the flames half-way through wouldn't cost you too much time in the grand scheme of things. In Privateer meanwhile, I can recall more than a few occasions where I'd be heading into the home stretch of some lengthy, multi-system cargo run just to be blown out of the sky by a randomly generated squadron of bandits. Did this sometimes happen because I'd bitten off more than I could chew? Most definitely. I just sometimes wished the game would have been a bit swifter in teaching me the folly of my ambition, rather than letting me waste 20 minutes thinking I was doing well and then tripping me at the finish line.

For all my complaints, I will say that Privateer does do a good job of providing varied ways to play the game. You're given complete freedom from the word go to play as a law abiding citizen, a murdering pirate, or some shade in-between. You can make your money running cargo, taking on mercenary jobs, or blasting other trade ships out of the sky and stealing their goods. Doing that last bit will naturally make you enemies with the lawful authorities, but you can always just find a friendly pirate base to land at if the local militias become too much of a pest.

The game's faction system, in turn, was also a high point for me. While I never quite took full advantage of it, I loved the fact that I had the freedom to look at the game's various factions (except the Retros; they're pricks no matter what) and take steps at any time to ally myself with one group or another. Granted, it pretty much amounts to killing enough people on one side or another until their enemies like you, but I ,nonetheless, enjoyed the fact that, if I really wanted to, I could buddy up with the Kilrathi.

Even with enjoying that aspect, however, my experience wasn't positive enough to sell me on Privateer. This, of course, leaves me in that fun spot of being the reviewer who wasn't all that thrilled with a game that many would name as one of the all-time greats. That being the case, I won't say that I can't see why a lot of people love this game. It boasts a huge universe, a metric ton of missions and gameplay options that a dedicated player could use to burn through months of free time. Honestly, this might just be a case of me personally not connecting with a game that, by the standards of countless others, is a classic. So if you're curious about Wing Commander: Privateer, go ahead and give it a shot. It only costs $5.99 at GOG and who knows, maybe its magic will work on you in a way that it didn't on me.

Come back next week to catch my review of the N64 RPG Aidyn Chronicles: The First Mage. In the mean time, feel free to PM me comments, game suggestions, and links to good deals on classic console titles.