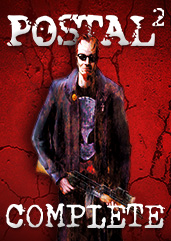 Originally released in 2003, Postal 2 has some interesting ideas but buries them under stinking mounds of tasteless humor, failed satire and mediocre shooting mechanics that make it barely worth booting up.

I'd be lying if I said I didn't like Postal 2 at least a little bit. Granted, there's a lot more about it that I wholeheartedly disliked. While it tries to sell itself as satire, the game is packed with humor and stereotypes so distasteful that I was frequently left cringing. Even on the mechanical level, it's far from the best shooter I've ever played. For its considerable flaws, however, it's a game with some honest-to-Odin ideas and, whatever other fumbles a game might make, ambition is something I can always tip my proverbial hat to.

Dropping you into the shoes of the disgruntled, trench coat wearing sleeze-ball politicians and parent's group like to imagine gamers to be, the game starts off on the Monday of a week filled with everyday tasks. You'll find yourself faced with daunting objectives like picking up milk, returning library books, and getting Gary Coleman's autograph. What makes Postal 2 interesting is the way it uses these tasks to make a point.

Gamers are far from being strangers to the antics of politicians and parent's groups criticizing video games on account of the violent tendencies they supposedly instill in the people who play them. Heck, look up any random school shooting in America and you'll inevitably find some pundit suggesting that it's all just a side effect of people playing violent video games. That in mind, Postal 2 does everything it can to nudge you towards violence, but ultimately, it leaves you with enough choice that you can get through a lot of it without firing a single shot.

Take the aforementioned Gary Coleman book signing. When you arrive at it, you can kill everything that moves and pick up a signed book off of one of your victims. Alternatively, however, you can just wait in line and accept a peacefully earned autograph like a normal person. The game is rife with moments like this; lines to wait in, rude people, protesters. It throws annoyances at you left and right, gives you all the tools to destroy them and then makes it possible for you to not do so. In essence, the game is only as violent as you make it. That, to me, is absolutely brilliant. In fact, as far as rebuttals to the anti-gaming lobby go, I'd toss it up there as one of the smartest that anyone in the gaming industry could have come up with. Or at least I would if the game didn't completely botch the concept.

The problem is that while it mostly lets you make your own choices, there are moments where it basically throws its hands up in the air, says "to hell with it" and forces you to start shooting people. At one point, for instance, you're returning a library book when a group of anti-reading protesters ("Save a tree! Burn a book!") storms the building and sets it on fire. As far as I could tell from my numerous reloads, there's no way out except fighting your way through them.

Now, it is worth noting that you're not the aggressor in that situation. You're generally responding to someone else and the player can even find a stun gun which can be used as a less than lethal option to deal with threats. Even so, it still feels to me like a revocation of the game's efforts to throw you into some situations where you'll face minor annoyances and then follow those up with gun-toting maniacs that are much out for your blood. It just muddied the waters and left the gaming feeling more standard to me when, otherwise, it could have been an interesting piece of interactive commentary.

Even setting those issues aside however, these forced firefights often come across poorly thanks to the game's tone which aims low and never misses. Having your confession session at the local church interrupted by suicide bombing Osama bin Laden clones just comes off as awkward. I was similarly put off by the rest of the game's enemies being populated by people like anti-gaming protesters and vegetarians. However much I might personally dislike a group or what they stand for, I still try to approach them with a modicum of reason. Postal 2 on the other hand basically seems to drop guns in the hands of anyone its developers don't like so the player can have an excuse to shoot them. Maybe that works for some and if so, more power to you; it's just a game after all. For me though, when it tried this sort of satire (I use the word loosely) it fell flat.

Even if I felt disappointed by it pushing me into action however, I entirely understand why the developers did it. Because as much as I can admire providing choices outside of riddling the world with bullets, I'll be the first to admit that Postal 2 is kind of a bore when you take the peaceful route. It's unfortunate because I'm convinced that playing a normal person doesn't have to be as dull as it makes it. As it stands, however, there's not really anything else to do besides walking around and shooting people. You can explore most of the buildings in town, which is nice, but you'll usually just find more guns. And I hate to say it, but a game still needs to be fun even when it's taking on the lofty goal of examining human nature.

Sadly, even when you do cut loose and start blowing the town away, Postal 2 still gets old kind of fast. Some of this stems from the actual shooting having a lot of problems of its own. The weapons, for instance, are balanced so poorly that I pretty much stuck to a few key weapons unless I ran out of ammo and had no other choice. It also bothered me a lot how little aiming at different parts of a foe's body affected them. I kind of expected a title made in 2003 to include headshots with a consistent instant-kill effect. This could, of course, just be me being a bit spoiled. That said, when you consider that the original Far Cry, a vastly superior game in every aspect, came out the year following, realistic headshots don't seem like too much to ask for.

None of this is to say that there's no fun to be had at all. The gasoline can weapon, for instance, is an absolute stroke of brilliance that needs to appear in other games. I will also fess up to maybe occasionally enjoying the urination ability. It might be beyond stupid, but I still laughed the first (and seventh) time I used it to disperse a crowd. Beyond that though, the game's action experience can be summed up as a less than satisfying version of the rampage's that Grand Theft Auto has mastered so well. It's fun, but once you've done it the first time you've pretty much experienced everything that Postal 2 has to offer. It's unfortunate, because there are good ideas buried under all of its substantial muck. Those ideas, however, aren't worth the $9.99 GOG's asking for it. There are better games out there, more deserving of your time. Go play those instead.

Come back next week for my first user requested review of the PC fantasy RTS Sacrifice. Until then feel free to PM me comments and suggestions for future reviews!

(Edited after publication for clarification.)