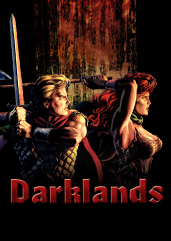 Darklands drops players into a fantasy tinged version of medieval Germany where devils are real and power can be found in prayer just as much as it is in arms. Complex and huge almost to the point of being overwhelming, it's an exemplar of what makes old CRPGs worth playing.

If I had to describe Darklands in a single word, it'd be ginormomongous. If I were restricted to real words though, I'd probably just go with huge. This game is gigantic and, after playing it for two weeks (I actually rearranged my schedule for this month to give me more time) I have to admit that I still feel somewhat inadequate in the face of reviewing it. This is the sort of game that simply demands more time than I had to play it. In fact, if you ever wonder why I don't review more RPGs (my favorite genre by far), games like Darklands are the reason. They're just too damn big. That being the case, I still think I can give you an accurate opinion on whether or not this game is worth your money. (Spoiler alert: it is.)

Taking place in a fantasy injected version of medieval Germany, it tasks you with creating a party of adventurers and using them to traipse about the countryside, gaining fame and renown while also combating the forces of evil. As simple as that sounds, it's an experience that's rooted in the sort of mechanical complexity the early era of role-playing games are perhaps best known for. The instruction manual is 108 pages long. The cluebook is 125 pages. Simply put, there's no attempt here to make things palatable for more casual players and this isn't the sort of game you push through in a few days.

It's to its credit that I still had a lot of fun fumbling around with it for two weeks. Some of this comes from the game's surface level. As much as many people like to rag on titles with too much grey and brown, I've always had an odd attraction to games with a grim aesthetic, especially when they happen to take place in a a medieval countryside as genuine feels incredibly genuine It also boasts one of the more interesting uses of Christian religion that I've seen in any RPG.

It portrays it as people might have in fact viewed it back in 15th century Germany, emphasizing things like the power of saints and miracles while also treating forces like witchcraft and the devil as legitimate threats with real world weight. A lot of the actual gameplay, in turn, involves wandering about the countryside, currying favor with the various representatives of God while also rooting out and defeating the forces of evil.

The amount of freedom the game allows you in completing this task is more than a tad wonderful. From the word go you can pretty much wander around anywhere you want. Granted, doing so early in the game is an easy way to get yourself killed, but after you get a bit stronger you can literally waste hours just walking from location to location, exploring the world and responding to random events, of which there are many.

You'll also, of course, spend a lot of time fighting which is another one of the game's strong suits. While there is a certain level of repetition you'll have to make peace with, Darklands combat is generally fun, employing a system none-too-different from later genre standards like Baldur's Gate. Battles are fought in real-time from an isometric-ish perspective and allow the player to pause time to make tactical decisions. These decisions, admittedly, aren't always the most complex. In fact, outside of using alchemy potions to augment your warriors and attack your opponent, the most you're going to have to do in a majority of battles is pick which enemy you're going to gang up on and pick off first. Even so, it was rare that I'd stumble into a fight and find myself sighing over the prospect of killing another group of bandits

And even if the combat isn't always complex, it's more than capable of kicking your ass if you fight stupidly. The game has no qualms about punishing your mistakes, whether they're simply pushing your characters too hard, equipping them improperly, or engaging in a fight that you should know you're too weak to handle. I learned fast, for instance, to avoid contact with giant spiders whenever possible (forgive me Gregor, I hope they ate you quickly).

More entertaining for me than the combat, however, were the actual elements of role-playing involved in the game. It's no secret that a lot of early RPGs were made very much in homage to classic tabletop games like Dungeons & Dragons and its ilk. Darklands is probably the closest I've ever come in a video game to feeling like I was sitting at the table of an actual pen and paper RPG. The building of a character is remarkably in-depth, giving you control over their age, gender, career (back story material if there ever was any) and, of course, their various attributes and skills.

These skills, in turn, can redefine how you approach a variety of encounters. Having a character with high charisma, for instance, can help you bypass gate tolls and get you into cities by sweet talking the guards. Likewise, having high stealth stats comes in handy when you tick off said guards and need to slip away from them down a conveniently placed alleyway. Not investing your skills wisely, conversely, can leave you stranded up crap creek. Case in point, I accepted a quest to break into the office of the local Medici to find evidence of treason against the city's officials. Figuring it might be useful, I went and bought a lock-pick prior to attempting the job. Waiting until nightfall, I then made my way to the offices only to discover that none of my party members had enough artifice skill to actually use the damn thing.

As much as I appreciated the game's forays into complexity, I will also admit that there were moments where I wished the developers had maybe opted to keep things a bit more simple. I never quite got a handle on the alchemy skill, for instance. Granted, a lot of that has to do with my own preferences as a gamer. I'm not a fan of in-depth crafting which, for all intents and purposes, is what alchemy is. You learn formulas, you gather the ingredients, and you mix them up to make potions with varying effects. I imagine this might not sound that bad to other players, but it's an element of the game I never warmed up to, even after I started to gain more experience with it.

The game's religious elements could also, at times, be a bit too much for me. Don't get me wrong, as I said earlier I liked the way it used them to help fashion a more authentic medieval setting. Unfortunately, they also added a lot of extra moving parts and, especially when you're just starting off, it can be incredibly daunting to figure out even with the cluebook open. That being said, this could just be another issue stemming from the fact I didn't play the game long enough. I do believe there is a limit to how long it should take you to learn a game, but I also can't fault it for doing something ambitious and complex.

More to the point, as daunting as some of its deeper mechanics can be, I still had a lot of fun with Darklands and could see myself playing it again someday in my free time. It will, of course, have to take a number behind the rest of my backlog (up to 37 games now), but I still definitely look forward to the day where I can boot it back up and give it the time and attention it deserves. In other words, if you're looking for a classic RPG that you can get lost in, go ahead and give Darklands a try. The learning curve can be a bit steep, but you'll definitely get your $5.99 worth.

Next week I tackle my first top-down shooter with the classic edition of Crimsonland! In the mean time, feel free to PM me with comments, suggestions and ideas for future reviews.