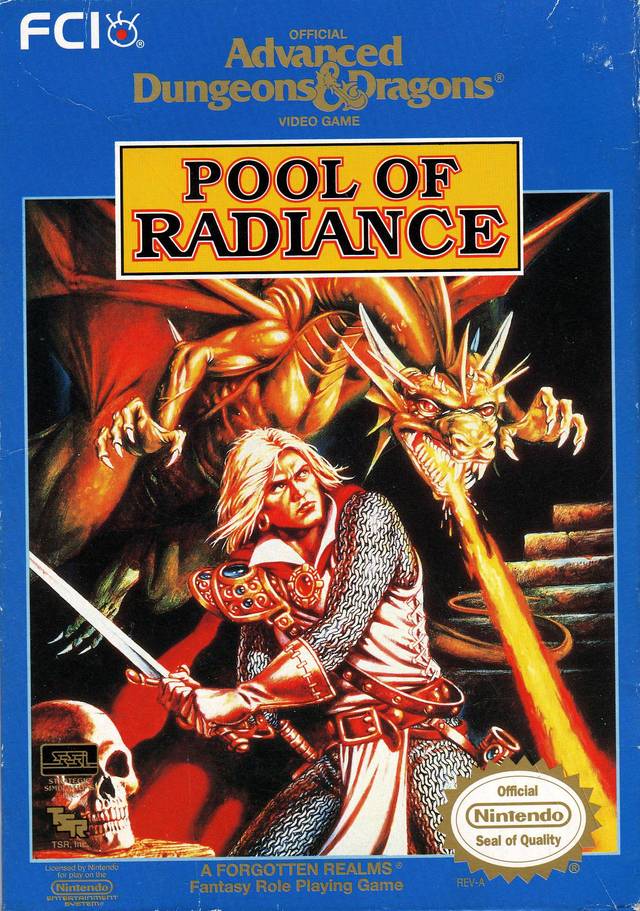 The NES port of Pool of Radiance can be overly hard and has some minor imperfections, but overall provides a lengthy and deep role-playing experience that genre and D&D fans would do well to revisit.

My first role-playing game was Final Fantasy. And while I'd rather not go too deeply into the details of how I feel about that one (saving that for another day), I will say that it was probably the perfect gateway game for a little kid who had never played RPGs before. Whatever else it may have been, it was accessible enough that a seven year old with a lot of free time and a barely intact Nintendo Power strategy guide could muddle his way through and plant the seeds of a lifelong love affair with the genre in the process.

Advanced Dungeons & Dragons: Pool of Radiance (the NES port, not the computer game) meanwhile, is the sort of game I could picture scaring me away from the RPGs for years. Following the efforts of a group of adventurers to free the city of Phlan from evil forces, it's relentlessly difficult and does everything it can to chew you up, spit you out and then take another bite for good measure. Even today, as a modern gamer who has toiled their way through experiences of renowned difficulty like Demon's Souls (still working on Dark Souls) , I found Pool of Radiance to be incredibly challenging. The first time I got into a fight, it ended with four characters of my five character party knocked out of play. I had to re-roll my party three times before I wound up with anything suited to surviving combat, and then it was an uphill battle to keep them alive.

Even so, I'd be lying if I said I didn't like and respect why this game is as hard as it is. The difficulty isn't arbitrary or forced. It's born, rather, from a desire to replicate Dungeons & Dragons itself, along with all the complexity and baggage that entails. And while some of that does mean the occasional bout of excessive difficulty, it also means a level of depth that's exemplary for the era and especially on the NES.

This depth becomes apparent almost from the word go when the game requires the player to create a party of characters in much same manner you would for an actual THACO tabletop game. Giving you access to everything including race, alignment, class and ability scores, you have free reign to build parties with wildly differing compositions and skills. Want a party of nothing by Dwarfish fighters? Go for it. Prefer Hafling thieves? Make five of them. Granted, anything less than a well-balanced party will come back to bite you in the ass as far combat is concerned, but if you want you have all the freedom in the world to hamstring yourself.

Case in point, when I first started playing I made a party with two fighters. Always preferring to play as a human in most RPGs, I made my lead a human fighter who, probably due to his lack of stocky stoutness, was completely inferior to his Dwarf fighter counterpart whom I'd internally envisioned as the party's comic relief. Frustrated at his insistence on dying in battle, I was eventually forced to replace him with another Dwarf (I named them Drum and Roll).

The games employment of AD&D's mechanics doesn't just extend to combat either. While they never really expand beyond basic "talk" options, you're usually given the ability to speak with NPCs and foes, sometimes with disastrous results. For instance, while wandering the slums of Phlan, I encountered a wizard with whom I had the option to converse with. Curious as to where that would lead, I went for it but then, thanks to some hasty A-button mashing, mistakenly picked one of my low-Charisma Dwarves as the mouthpiece for my party. This didn't please the grumpy old spell caster who cursed my insolence and attacked me with an overwhelming force of monsters who promptly chopped my poor party into adventurer kibble.

Ironically, I often had more success when conversing with monsters, which actually wound up being a bit of a life saver. While I've briefly touched on the piss hard nature of combat already, let me re-emphasize just how tough Pool of Radiance can be. Much as in real D&D, when your characters are at first level, it's possible for a single round of combat to completely wipe them out. This isn't always the case, but if you're like me and you have a tendency to forget to save your game or push too far into dungeons, it's easy to find yourself on the receiving end of a devastating smack down. Parleying with your foes can be a useful way to flat out skip combat and give you the chance you need to scoot back into town for some restorative rest at the local inn. On more than one occasion, the ability to talk was the only thing that kept me from losing sizable chunks of progress.

Which isn't to say you can avoid all combat. In fact, if there's one primary criticism I can give Pool of Radiance it's that it's pretty freaking grindy. Now, to clarify, I should say that I'm not one of those people who complain about any sort of level grinding. That said, I tend to prefer it when it feels more like an organic part of progressing through the game world. Give me a place to walk to and I'll fight every damn monster on the path from Point A to Point B. I just don't like it when I'm stuck doing laps in one monster infested area, trying to eek out enough experience points to work my way higher up the level tree so I can stop dying at every turn.

It doesn't help that combat in Pool of Radiance is on the extended side. Taking the form of isometric turn-based battles, even a small bit of combat bout is something that will last a few minutes. And while, to the games credit, I found the fighting to be quite fun, it still gets to be a bit tiring when you have to do it over and over again.

I'd also be remiss if I didn't mention the game's shoddy navigation. For all intents and purposes, Pool of Radiance is a first person dungeon crawler. Unfortunately, the first person perspective is such a mess that you'll get lost if you even attempt to use it. Luckily, it does feature a simple overhead map from which you're able to move around much more easily. This has the unfortunate side effect of rendering most of the game's visuals utterly pointless, but honestly, it's not the best looking NES game to begin with so it's not much of a loss.

In the end, Pool of Radiance is, in some ways, probably one of the best role-playing games on the NES and is easily one of the better examples of how to take a complicated PC game and port it down without completely neutering it in the process. It's occasionally flawed and a far cry from accessible, but it's also deep, challenging and the perfect game for an NES fan interested in a meaty, robust role-playing experience. Granted, snagging a working copy can sometimes border on pricey, but it's worth it if you find yourself feeling like something quality and old school.

Come back next week for the first portion of my two part look at the history of Dungeons & Dragons in video games, followed up by a review of Planescape: Torment at the end of the month! In the mean time, feel free to PM me with comments, suggestions and, as always, suggestions for future review games.