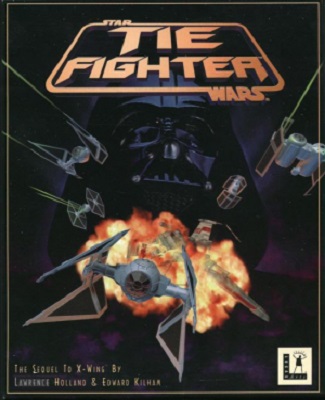 A mere year after Star Wars: X-Wing showed just how well licensed space flight sims could be, Lucasarts released a sequel: Star Wars: TIE Fighter. Just like the title implies, the game switches perspectives from the plucky, do-gooder Rebellion and puts you in the tyrannical boots of an Imperial pilot recruit. While TIE Fighter is an X-Wing reskin in many ways, Lucasarts really sold the idea that you could rise in the ranks of the evil Empire without making you feel like a cartoonish supervillain yourself.

TIE Fighter begins during the events of The Empire Strikes Back, as Imperial Fighter Squadrons start a campaign to restore order to the galaxy following the Battle of Hoth. Your pilot arrives as a fresh recruit, tasked with capturing Rebel forces and keeping the enemy from reorganizing. But as the game proceeds, you'll find yourself assigned to missions taking you away from the original films, spreading the Empire's reach to new star systems while combating a possible mutiny within the fleet itself.

The original X-Wing game wasn't quite praised in the story department, but in fairness, it didn't need to be. All it had to do was reference events from the original film and let player's memories fill in the blanks. That freed LucasArts to focus on developing engaging combat mechanics while giving the story a minimalistic hands-off approach.

TIE Fighter could have done exactly the same thing, swapping the Rebels with the Empire and trading Hoth for the Death Star. But this game goes a step further by restructuring missions to fit the Empire's goals. Instead of making a stand against incoming enemies, your pilot is assigned to clean-up operations in Hoth, "peacekeeping missions" to suppress civil conflicts, or to security operations surrounding a newly-developed space outpost. When you think about it, that makes a lot of sense: TIE Fighter really shouldn't be about underdogs fighting an insurmountable enemy. Being a soldier of the Empire is about combating smaller enemies who undermine everything you represent. The game pulls this concept off brilliantly and its solid execution makes the game more believable while distinguishing its missions from those of its predecessor.

What's better is that TIE Fighter doesn't always rely on elaborate cutscenes to relay these plot details. Whatever isn't explained over the course of mission briefings is slipped directly into the levels themselves. The updated AI, scripting, and message log systems let the game hide details in plain sight (like say, an Imperial officer defecting to a Rebel ship) and you wouldn't notice unless you break from your primary objectives to investigate. In fact, the game actively rewards you for hunting these details down. Each mission comes with an extensive list of secondary and hidden bonus objectives, and completing them will reward you with a higher score and maybe even a chance to join the Emperor's secret order.

What this adds up to is that TIE Fighter is able to continue with X-Wing's minimalist story approach while still having a more detailed story. It makes the entire experience a lot more complex than the "good guy vs bad guy" mentality the franchise usually lends itself to. You're not portrayed as a villain; you're a loyal soldier hunting down traitors and bringing order to the universe! Or, at least, that's what you can keep telling yourself. It all just amounts to a much more thoughtful game.

Of course, if you care less about story and more about the pew-pew-pew you can ignore it and plow ahead with the sci-fi dog-fighting. Speaking of which, the combat in this game is just as solid as in X-Wing itself. While there's a new selection of crafts and weapons to choose from, TIE Fighter is still very much about flying circles around enemy craft and blowing them to smithereens. The game includes some visual upgrades, as well as helpful additions like mission objective lists, maps, and an improved HUD. But the fast-paced gameplay isn't so different from the original, with TIE Fighter edging ahead only because LucasArts was improving on what came before.

Does that mean TIE Fighter is a perfect, frustration-free experience? Not always. If you're already well versed in joystick combat you'll probably be fine, but there will be a difficulty curve for newcomers. Most of this is because the majority of ship functions, like targeting, hyperspace, or calling reinforcements, require you to use the keyboard simultaneously. Once you get the hang of it, you should be fine (I recommend keeping GOG.com's included reference card handy) but even then it takes getting used to. A few times, I failed a mission because I wanted to check my objectives and hit the Hyperdrive button instead, ending the mission prematurely. On the plus side, that helps you feel like you're actually operating complex cockpit controls from your joystick-keyboard combo. (Keyboard and mouse controls are available, but they're far more clunky to work with.)

Also, TIE Fighter's objectives system is very literal, which can unintentionally cause problems. Let's say you're doing a mission where you have to defend a convoy as it docks with a friendly outpost. You manage to destroy all of the attacking enemy ships, so the mission should be over. But it's not a success until all friendly ships have docked. So if you're using an easy difficulty setting (or are crazy good at this game) you might spend 10-15 minutes twiddling your thumbs until TIE Fighter finally declares you a winner.

What's funny is it can work the other way around as well. During one mission, my final objective was to get into scanning range so I could investigate the contents of a shuttle. However, this was during a massive firefight, so I flew towards the shuttle at full speed. Either I wasn't paying attention due to blaster fire or was moving too fast to react. Whatever happened I flew directly into the shuttle and my ship exploded. That said, because I technically managed to scan the shuttle (from point blank range) the game counted the mission as a complete success and I didn't have to replay it. In other words, TIE Fighter is one of the few games you can win by dying.

But these are minor points against an overwhelmingly fun shooter. If you enjoyed X-Wing (or any other space sim for that matter), you'll find lots to love about Star Wars: TIE FIghter. As far I'm concerned, this is a series that deserves to make a comeback just as much as Battlefront and it's well worth the $9.99 GOG is charging for it.

Come back next for Marla Desat's review of Star Wars: Knights of the Old Republic. After that, the Good Old Review crew will be assembling a list of our favorite classic Star Wars titles. In the mean time feel free to send us comments and polite suggestions for future review titles!