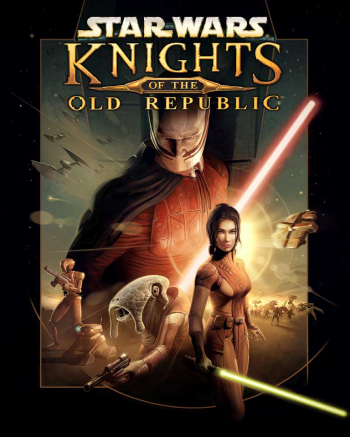 The classic roleplaying game Star Wars: Knights of the Old Republic has one of the best Jedi-centric stories out there, and remains fun and playable.

The first Star Wars video game to take on the RPG genre, Knights of the Old Republic was developed by BioWare and released for the original Xbox in 2003, later releasing for both PC and Mac. Set 4,000 years before the events of The Phantom Menace, the story of the Sith Lords Revan and Malak is one of the most well-known in the Star Wars Expanded Universe. In case you've somehow remained unspoiled of the games' famous story, I've kept this review as spoiler-free as possible.

The first time I booted up Star Wars: Knights of the Old Republic for this review, I went clicking through the character creation screen and quickly found myself lockedin an unexpected a moment of nostalgia. I was looking at the pre-made face of the character I played the first time I tried the game back in 2003 on the original Xbox. Starting the PC version from GOG, I was struck with how rare that experience is today. Games like Skyrim and Dragon Age: Inquisition allow complete customization of a character; there's little incentive to stick with a familiar face over multiple play throughs. With KoTOR though, the opening moments drew me in with a memory that I hadn't expect to value as much as I did.

Not all of the elements of the game inspired that kind of warm recollection, however. As well-loved as KotOR is, it will also make you appreciate some of the features of RPGs we now consider standard. The introduction to the games' controls is provided by a 4th-wall-breaking and clearly doomed ensign who kindly and calmly guides you through the interface while the ship you're on is under attack. The combat system suffers from unforgiving randomness and awkward AI pathfinding, and its inventory system lacks all but the simplest sorting mechanism that will leave you wishing for a search feature. The quest log system is better than some older RPGs, with your active quests given reasonably clear descriptions that are easy enough to follow, but there's no quest tracker or map integration to make finding your objectives easier.

Though I found myself missing modern RPG standards at times, it is still fascinating to see their nascent forms as they existed in KotOR. Interactions with party members, and their different reactions to quest choices are present, but less obvious than the relationship tracking ratings used by modern Bioware RPGs. The visuals still hold up reasonably well, but depending on the resolution you choose you may find that the menus and pause screens inhabit a laughably small area of the screen. That peculiarity, as well as the cutscenes, really give away the game's age. A few reused voice actors also caused me to do double takes, especially when I realized that one actor served both as a revered Jedi Master and a major antagonist.

Journeying through the game I played a scoundrel (and later a Jedi Sentinel) with the recommended stats. I was happy to find, in turn, that the game's suggested paths are good enough to get you from start to finish with limited frustration. I also appreciated, however, that the underlying game system (based on the pen-and-paper Star Wars Roleplaying Game by Wizards of the Coast) gives you enough flexibility to play a more highly optimized character if you want to.

The actual combat bounces back and forth between being dreadfully boring and panic-inducing. Most characters have only a few activated abilities, which makes managing those abilities generally simple. Unfortunately, the interface for juggling your party's abilities or switching weapons mid-fight is clunky. It's hard to direct other party members, and moving interrupts combat actions, making tactical positioning a tenuous affair. In most fights I was able to leave my characters on auto-pilot, and moved to an almost turn-based system of combat for difficult enemies: pausing, queuing up attacks, unpause, repeat. Frustratingly however, even well-planned assaults can be ruined by a bad luck. A poorly aimed stun grenade, for instance, can render a character vulnerable and, in worst case scenarios, lead to a total party kill in what would normally be an easy fight. Other times, you'll go into a battle with the odds clearly in your favor and somehow still wind up defeated. It's cases like these where the influence of the game's tabletop origins really show. The best-laid plans can be lain to utter waste by a bad dice-roll behind the scenes.

Luckily, there's also a lot of ways to exploit the systems in place to make fights easier. In fact, it's sometimes almost funny how forgiving the big set piece battles can be. When breaking into the Sith base on Taris, it was no trouble at all for me to just nip out to the store to pick up some extra computer spikes in the middle of assaulting the base. Since the areas are static, not instanced, I simply walked out through the rooms I'd already cleared, walked across the city, purchased my spikes, swapped out a party member and finally marched back in to continue my assault on the patiently waiting Sith. A lot of this derives from features the game implements to make things a tad more convenient. You can generally save your game wherever you please, something that becomes a must as you never know when you'll be jumped by Dark Jedi. The fast travel system also allows you to return to your base from almost anywhere, healing you fully before letting you instantly transit back to where you came from.

Of course, using these short cuts kind of sours the immersion, and the strength of KotOR lies in its story. You slowly reveal the background of your companions through dialogue and quests, building friendships and tearing them asunder if it suits you. It also does a good job of implementing its much vaunted morality system, which I sometimes found to be affecting even outside of moments of obvious choice. When I began, I planned to play a light side do-gooder through and through, but the more I rummaged through civilian's storage lockers on Taris and gleefully tossed myself into the dueling ring again and again, I started to feel like the character I was playing wasn't so good-hearted. After all, if I just broke into each and every damn apartment on this level, that doesn't really scream guardian of justice.

Despite some of the peculiarities of its age, Star Wars: Knights of the Old Republic is the best Star Wars role-playing game out there, with complex moral decisions and an emotional story that stuck with a generation of gamers long after the game ended and the Star Wars credits music started blaring. It isn't perfect, but it's still an excellent experience even more than a decade after its original release that I'd heartily recommend to anyone looking for a solid and sizable role-playing experience. At $12.49 from GOG, it's more than worth putting back on the Jedi robes and playing through again. And, if you're one of those elusive Krayt dragons who've managed to remain unspoiled about the game's story, it's one of the best RPG plots out there.

Come back next week for Marhall Lemon and Stew Shearer's run down of their favorite Star Wars games of all time. After that, we'll move away from George Lucas's mansion maker and take a look at the classic space game Star Control 2..