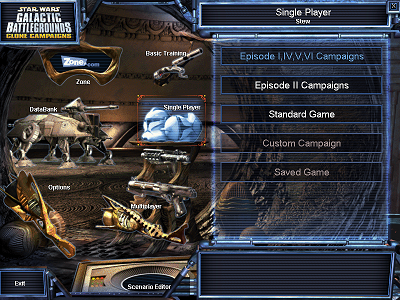 Star Wars is the kind of franchise associated with plucky rogues and dashing displays of bravery. It's a universe where a humble moisture farmer can become a hero mere days after being handed their first lightsaber. The thing is, the whole thing is still technically about a war requiring strategy, forethought and armies. For every Luke Skywalker guided by the force, there are hundreds of Rebel troops that rely on tactics and orders to achieve their hard-won victory.

For some reason, that grand-scale strategy experience isn't seen too often in Star Wars video games. One of the most memorable examples, however, was Star Wars: Galactic Battlegrounds; one of the first attempts to bring Star Wars into an RTS format. Built using the Genie engine that produced Age of Empires, Galactic Battlegrounds benefitted greatly from working with a traditional strategy game model and is still immensely satisfying even more than a decade after its original release.

A big part of Galactic Battleground's appeal is its attention to detail. LucasArts must have spent an impressive amount of time translating countless elements of Star Wars lore into its design. The original game includes six full factions - Empire, Rebels, Royal Naboo, Trade Federation, Wookies and Gungans - while the Clone Campaigns expansion (bundled with the GOG.com re-release) tosses in the Galactic Republic and Confederacy armies. That's eight factions drawn from five movies, each carrying unique unit and building designs. Alone, that makes the scope of each battle varied and impressive. Want to try and prove that Stormtroopers are better than clone soldiers at their height? Well, now you can!

Unfortunately, working with the same engine means that Galactic Battlegrounds is working within Age of Empire's limitations as well. One of the major criticisms Battlegrounds received at the time of its release was that it was just Age of Empires with a Star Wars paint job. That's not a bad thing, but sometimes it does sometimes feels like it's Star Wars jumping through hoops to fit with AoE's mechanics. While the armies themselves look varied, the actual unit types are essentially the same. Every faction has the same array of worker, trooper, and mech types as their opponents, with the only real variation being their visuals. It's an easy way to keep the game balanced, but raises some weird implications that simply don't work in the context of Star Wars.

For example, why does the Trade Federation's droid army produce food? They don't need to eat. They need batteries, not farms. Yet you still require biological food sources (both fruit and meat) to develop new units, and can build farms and nurseries to do so more efficiently. They at least don't require you to build shelters to increase your population or suggest that Trade Federation droids need sleep. Even so, it remains a clear sign that Galactic Battlegrounds was less concerned with Star Wars internal logic in mind than it was was with quickly crafting a balanced RTS.