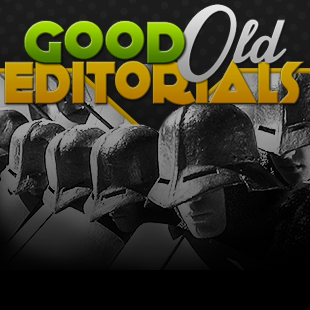 For the most part, I tend not to comment much on the visuals of the retro titles I review. Some of this is because I don't care too much about a game's visuals unless they're remarkably good or remarkably bad. Beyond that, however, the simple fact is that when you're dealing with video games that are often older than you are, your graphics-based commentary is usually going to stray too far "dated" or "surprisingly good for its age." There isn't much to say that wouldn't be redundant. With that being said, there is the occasional title retro game that visually catches my interest.

Castles 2: Siege and Conquest, for instance, is primarily pixilated but, in its CD-ROM version, uses extensive chunks of full-motion video. The FMV's themselves are somewhat mixed in how well they're employed. They're a bit overused, but they never get too annoying and usually work well to set the tone and drive home the mood of what's going on in-game. What interested me most about FMV's, was their origin. Rather than filming their own live action sequences, the game's developers instead poached clips from a pair of old movies: The Private Life of Henry VIII and Alexander Nevsky. The more I read about the two films, the more interested I became in actually watching them to see how well they held up. I thought it might be fun, in turn, to share my impressions with you all before heading into my review of Dragon Wars next week.