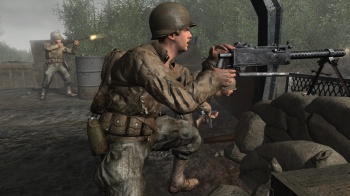 On the other hand, Infinity Ward did a remarkable job of crafting World War II's landscapes. Most levels are based on actual WWII operations and display an impressive attention to historical details. Take the D-Day battle on Pointe du Hoc, where American Rangers climbed a 100-foot cliff, fought through a network of trenches, and destroyed artillery guns threatening Omaha Beach. Call of Duty 2 recreates almost every aspect of these events, right down to the guns being relocated and abandoned by German forces before the assault. In fact, I'm fairly certain the in-game map was based on this assault plan Allied Forces used for the operation. And that's not getting into Call of Duty 2's towns, cities, and countrysides, all of which were meticulously researched from multiple countries. I'm not saying Call of Duty 2 is completely realistic - it obviously simplifies combat for gameplay purposes. But these are still wonderful touches history buffs will appreciate for decades to come.

Speaking of unrealistic gameplay, Call of Duty 2 introduced regenerating health to the series. Blame this game for everything that came after if you'd like, but to be honest, I actually enjoyed it here. First of all, enemies attack you in such high volumes that collecting health supplies would be a colossal chore. Second, health takes about two seconds to fully regenerate, so you rarely have to duck behind cover to save your life. Combine these points, and Call of Duty 2 constantly pushes you to act like a war hero. You're always facing incoming bullets - which keeps tensions high - but still have a chance of success when breaking from cover to fight enemies. You could mow down dozens of Nazis before a few lucky shots take you out, which is far more satisfying than the "pop from cover, pull back, repeat" routine most modern shooters fell into.

But my all-time favorite element of Call of Duty 2 - one I wish its sequels used more often - are open battlefields. Instead of making you proceed through linear objectives, most levels are designed so you can choose how to engage the enemy. Want to fight the Nazis head-on? Move into a sniper position and thin their ranks? Flank their outpost and attack from the rear? All valid options. In fact, several missions drop you into a town with multiple objectives and let you decide which order to complete them in. You'll still have some linear sequences and scripted set pieces in Call of Duty 2, like riding vehicles or defending fixed locations. But they're far more enjoyable as elements of a robust game than linear moments stapled together into a campaign. 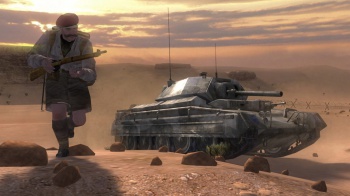 Call of Duty 2 also introduces some interesting new AI mechanics, but I have to admit they left me with mixed feelings. The concept itself sounds great on paper - instead of marching into battle with a computer-controlled partner, you're part of a full military division or regiment. As you proceed, NPCs target nearby enemies, react to changes on the battlefield, and even complete certain objectives without your interference. While most of these characters have no personality of their own - save for familiar faces like Captain Price - it's an incredibly refreshing addition to CoD's gameplay. It simulates the feeling of being in a Band of Brothers, instead of being a lone hero who single-handedly defeats enemy armies. And it's certainly hard not to be invested in the action once a fellow soldier, one who threw that live grenade back at the Germans seconds before, is gunned down beside you.

The problem is each AI constantly updates you on battlefield events. If an NPC spots a sniper or a Nazi trying to flank you, they'll let you know right away. That's useful at first, but becomes absolutely maddening during large-scale engagements. They'll never stop talking until every Nazi has fallen, and it awkwardly blends in with the gunfire, explosions, and artillery shells all around you. Yet at the same time, that's exactly what World War II was like. It's hard to fault Infinity Ward for being authentic to the experiences of real-life soldiers, however annoying they may be. Still, it probably wouldn't have killed anyone to better pace combat so it's not constant noise all the time.

Call of Duty 2 is filled with such contradictions. Infinity Ward designed a fantastic historical setting, but didn't bother crafting a story to help it stand out. It has robust combat and tactical mechanics, but keeps handing out similar combat encounters. The AI has an immersive presence that eventually annoys you as much as it helps.

In other words, while I recognize Call of Duty 2's flaws, I can't help but enjoy playing through its campaigns. Perhaps I'm just craving a new World War II shooter, but for now, that's a contradiction I can live with.