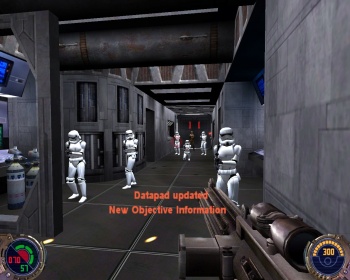 But in practice, these mechanics are awkwardly mashed together in some really frustrating ways. The gunplay, for example, isn't satisfying at all. Blaster rifles can only do substantial damage via headshots, while enemies constantly strafe to avoid your weapons. You're often facing three to seven enemies at once, all of whom return fire simultaneously. Explosives sometimes help, but Jedi Outcast's thermal grenades have tiny blast radiuses that are unlikely to take out more than two opponents. On the first level at normal difficulty, it's easy to tear through shields, health, and ammunition during every Stormtrooper encounter. That's beyond challenging, suggesting Jedi Outcast simply wasn't designed for FPS combat. Which would be fine, if you weren't restricted to it for five whole levels.

And once you begin the early Jedi missions, those shooting mechanics start gumming up the works. Take the countless snipers on Nar Shadda, whose high-powered rifles bypass your lightsaber defense. So instead of running around, flexing your Force muscles, and trying out your lightsaber, you're constantly stopping to peer at sniper perches. And of course, only headshots instantly take out these enemies as well, so you'll probably suffer damage in-between your rifle shots. Again, this wouldn't be so bad if you had Force Heal - but you don't get that until after Nar Shadda.

You'll eventually assemble enough Force powers to make the lightsaber your only mandatory weapon, which is when Jedi Outcast really starts to shine. Deflecting blaster shots, rushing into enemy fire, and throwing your blade at nearby opponents is immensely satisfying. The lightsaber is also a highly dynamic weapon compared to blasters, sizzling against each object it touches and severing enemy limbs on contact. Walking close to walls even leaves scorch marks, which was a great way to showcase Jedi Outcast's state-of-the-art tech. Although today, that makes it seem like Kyle clumsily stumbles through hallways without quite knowing how to grip his lightsaber. 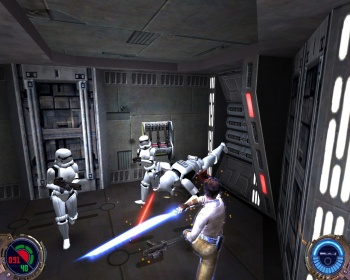 And then you have lightsaber duels - by the Force, those lightsaber duels! Once you've mastered combat against blaster-wielding goons, you'll face Force sensitives like the Reborn and other Dark Jedi. These battles are dramatically paced and deeply engaging, since they block attacks as easily as you can. Beating a Force user is a matter of correctly timing your lightsaber strikes or finding creative uses of your powers. One of my favorites is a boomerang strike, where you throw your lightsaber past them so it strikes from behind on the return trip. Admittedly, this can backfire and knock your lightsaber to the floor, leaving you defenseless. But rushing in to grab your weapon up before a Jedi strikes is thrilling in and of itself!

Sadly, a Jedi can't spend all their time engaged in riveting lightsaber duels, not in a PS2-era video game, anyway. You also have to complete puzzles, and some real head-scratchers at that. These aren't logically connected points where the next step is obvious with a little forethought. These are vague objectives where you're more likely to stumble into a solution than anything else. My favorite is when Lando Calrissian tells you to complete multiple objectives outside of a locked hanger, but gives you barely any direction on how to reach them. Having puzzles isn't a bad thing, but Jedi Outcast's really break the flow of gameplay - having a walkthrough or hint guide handy isn't a bad idea if that bothers you.

There are a few other quibbles I wish Jedi Outcast had addressed. It would've been nice to let players choose Force upgrades instead of automatically doing it for you. A few more non-combat levels would also be helpful for dramatic pacing, such as when you explore the Jedi temple on Yavin. But mostly, I wish it didn't take so long to develop Kyle Katarn's Force powers. Those abilities are Jedi Outcast's greatest strength, and everything else around them feels rushed and tacked on by comparison. It's almost like you're forced to play a completely different Star Wars shooter before you can experience Jedi Outcast's wonderful lightsaber combat game.

So is Jedi Knight II: Jedi Outcast worth playing today? If the Force is strong with you, grit your teeth and push through to the good stuff - you'll definitely enjoy it. But if you don't have the patience, maybe skip this and try a different Star Wars game. Perferably one that actually puts a good blaster at your side.

If you're not in a movie line-up next week, check back for a retro review of Star Wars: X-Wing Alliance.