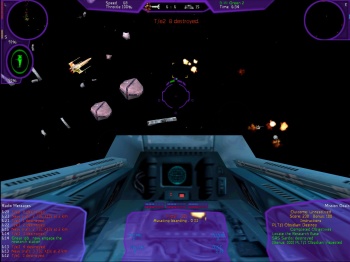 That said, looking this closely at a fighter pilot's life raises weird ethical issues Star Wars movies tend to gloss over. By its own admission, the Rebellion is an insurgency that faces a more powerful enemy, so it has no intention of fighting fair. This means some mission objectives include shooting down noncombatant supply craft, or destroying stations with valuable scientists aboard. Sure, it's a war - but shooting down characters who aren't shooting back runs counter to Star Wars' good vs. evil themes (Greedo being the rare exception). And that's not getting into your family missions, one of which involves ditching the Rebels so you can dole out an Azzameen honor killing. At the same time, I'm impressed that X-Wing Alliance is so immersive it can leave you asking questions about its world.

Thankfully, X-Wing Alliance is still a Star Wars game, which means the action absolutely comes first. You'll fly into fast-paced dogfights with enemy fighters, rush towards capital ships for bombing runs, and shoot down torpedos just before they strike your tiny craft. The space battles are also X-Wing's biggest, as chaotic shootouts unfold around you and rows of TIE Fighters fill the screen. And that's nothing compared to the Death Star battle, where a space station looms ahead as multiple Star Destroyers approach from behind - including the massive and terrifying Executor.

While each battle is fun and action-packed, there is one disappointing factor - many primary objectives feel arbitrary. During an early mission, the Azzameen's must attack enough ships at a Viraxo station to attract a Star Destroyer's attention. (Long story.) The mission objective calls for you to destroy 25 percent of ships, but the Star Destroyer arrives based on a time limit - you only have to survive long enough for it to show up. Yet if you didn't destroy those ships before leaving? The mission is considered a failure, and you must try again. During another level, my X-Wing squadron was asked to detour from an escort mission to defend a second convoy under attack from TIE Fighters. But there's also a hidden primary objective: If 50% of those convoy ships are lost, you fail the mission.

Hiding a primary objective from the player only to reveal it upon failing is infuriating, and it doesn't even make sense internally. This secondary convoy doesn't have any story importance outside of introducing prototype TIE Fighters. Meanwhile, your commanding officer is back in the original escort - a worthwhile reason to restart the mission if he's lost - but never faces any danger. You'll often fail entire missions thanks to objectives like these, sometimes unwittingly. The better choice would've be to introduce more secondary options, so you feel a thrill for succeeding without bringing the game to a halt anytime you fail. On the plus side, you can skip any failed mission at debriefing that you feel is especially frustrating.

Mechanically speaking, X-Wing Alliance is still incredibly solid. All shooting and dodging elements from classic X-Wing games are still here, refined to near perfection from years of experience. Unlike previous X-Wing titles, you must use a joystick instead of keyboard/mouse controls - Alliance actually shuts down if one isn't plugged in. But grabbing one is worth the purchase in this case, since it adds another layer of immersion to the game. There are still an overwhelming number of keyboard starfighter commands, but Alliance's tutorial chapter does a solid job of teaching most necessary ones. There are a few exceptions however, so keep the manual handy if you're not sure of a specific command.

The impressive range of ships available in X-Wing Alliance is also worth mentioning. Outside of the typical X-Wings, A-Wings, and bombers, you'll have access to various transport ships. In particular, Alliance introduces Corellian YT freighters to the series, complete with gun turrets you can occupy while a co-pilot flies the ship. On top of that, the Combat Simulator turns almost every in-game ship into playable starcraft, which will keep some players busy for hours.

But the most important detail? You can fly the famed Millennium Falcon directly into the Second Death Star, eventually making your way into its core. It proves an appropriate finale on multiple levels - it's a great climax, and marks the point where X-Wing had officially covered the entire Star Wars trilogy. I have to admit, that's an appropriate way to conclude such a landmark series. It's just a shame the era of space sims ended with it, leaving only a handful of games like Star Wars: Starfighter to fill the void.

Of course, now that space sims are making a comeback with titles like Elite: Dangerous and EVE Valkyrie, who knows? Maybe we'll soon return to our X-Wing cockpits, pilot vehicles with joysticks, and rush in formation towards uncountable TIE Fighter squadrons. Here's hoping the Force is with us on that score.