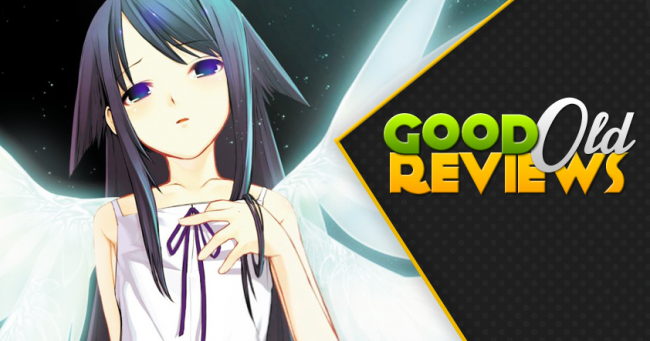 Before we start: Saya No Uta is a pornographic visual novel. This review doesn't contain any adult content, but it does contain frank discussion of the game's use of violent and sexual imagery, so I'd avoid reading it at work if I were you.

Saya No Uta, originally released in Japan back in 2003, has something of a reputation. It's one of the few erotic visual novels to achieve significant popularity outside of the medium's niche audience, thanks to word of mouth and the later success of writer Urobuchi Gen's anime work. The "Urobutcher," as fans call him, made a name for himself as a screenwriter with a taste for brutal twists and an eye for genre deconstruction. Saya No Uta has all the hallmarks of his work, and while it's an obvious testing ground for thematic approaches Urobuchi would later perfect in Puella Magi Madoka Magica, and Psycho-Pass, it also stands as a brilliant horror experience in its own right.

To begin with, I honestly can't stress enough how good Saya No Uta's opening scene is. The writing is terse and effective, and it's an unsettling example of what visual novels can accomplish that regular novels can't. The audio distortion, the wailing background track, and art that imitates an overexposed photograph blinding me with spots of pure white, combine to create a palpable sense of nausea. It's about a strong a horror opening as I've ever experienced. I really don't want to spoil it for you. Seriously, see it for yourself before reading on.

With my interest piqued by its excellent cold opening, Saya No Uta quickly set about laying the ground work for the slow burn of its first act. A car accident has left medical student, Sakisaka Fuminori, down two parents and up one case of severe brain damage. The pioneering brain surgery that saved his life also mangled his perception of reality, causing him to see the world (and everyone in it) as a pulsating mass of organs, sinew, and bile. The nightmare the game opens with turns out to be nothing more than a conversation with friends in the med-school cafeteria. It turns out that looking at the world through a filter of never-ending Cannibal Corpse album covers isn't too good for the old brain box and it's clear Fuminori is very close to breaking when we meet him. The only thing keeping him going is Saya, a young girl he met while in hospital and the only creature he's met since the accident who doesn't look like she's made out of ground beef and calamari.

Saya is set up as just too good to be true right from the very start. Barefoot and clad only in a clean white summer dress, Saya's an adorable bundle of moe tropes. She's childlike (both physically and mentally), selfless, clumsy and innocent. Everything from her design to her modes of speech scream love-pillow fodder, but Saya subverts those genre conventions in surprising, and increasingly unsettling ways. It's during the game's sex scenes that Saya's departure from her trope become the most obvious. Instead of being timid and virginal, she's aggressive and experienced. She frequently initiates sex with Fuminori, who seems the more hesitant of the two, and is strangely obsessed with his semen. By the time Saya No Uta begins the two are already in a sexual relationship, but over the course of the story it develops from a kind of mutual co-dependence to genuine romance.

So yeah, no prizes for guessing that Saya isn't quite what she seems. The game lays on the foreshadowing pretty thick, making me increasingly uncomfortable as Fuminori becomes more and more enamored with Saya, rejecting and becoming increasingly hostile to his former friends. Nor is it a particularly big mystery where Saya's supply of delicious mystery meat is coming from as said friends begin to disappear. The game's first sex scene was sweet, a brief moment of respite for a man trapped in an ugly world, but as the game goes on, the tension builds and Saya becomes more and more suspect, the couple's lovemaking becomes more and more unnerving. It's genuinely creepy stuff.

From there, the story builds into a brilliant second act twist and completely shifts gears for its third act. While most of the game's four to six hour running time is spent slowly building up a sense of dread, most of its narrative weight is reserved for the all-too-short second and third acts. I can't really talk about those without giving away some massive, ruinous spoilers, so be warned.