That's not to say Omikron's world isn't engaging - just limited. Exploring the game as Kay'l has great potential as you hunt down clues and interview witnesses. It's also possible to grab open cases as side quests that other officers weren't able to close. Omikron also has various hidden secrets that reward your imitative - such as tracking down an underground fighting tournament without any quest arrows guiding your path. Sadly, Omikron's most interesting secrets are few and far between me, forcing you for focus on the core game. Which is something of a mixed experience.

Omikron's gameplay switches between three primary modes: Exploration, fighting and shooting. Exploration treats Omikron as an adventure game, as you search a huge city for solutions to puzzles or obstacles. Fighting switches to one-on-one combat against specific opponents, with all the health bars and combo moves the genre entails. Finally, shooting flips gears to an FPS as take on multiple enemies with futuristic weaponry.

Each mode certainly has its moments - I enjoyed the Fighting leveling system in particular, where each combat (win or lose) improves your moves and combos. But Omikron clearly suffers from splitting its attention three directions. Shooting suffers the most as a clumsy and obligatory afterthought which adds little satisfaction to the game. Exploration is a little better, but the city's size and usual design make for awkward navigation. What's more, the controls for each gameplay mode are completely different, forcing you to customize each key or juggle each clumsy configuration. 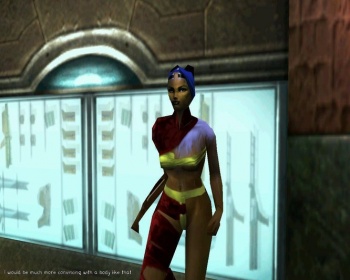 Omikron does have one fantastic new element: Its resurrection system. Since you're not a body, but a soul which crossed the dimensional barrier, your character can't die - you transfer to the next NPC who touches your corpse instead. The process resets your combat stats and abilities, but lets you continue the game with a brand-new body. You'll find yourself inside a morgue employee, a journalist, or one of the strange alien beings inhabiting Omikron. In some cases, it's possible to visit their homes and learn more about the identity you've assumed. Even ignoring their backstories, treating bodies as disposable resources is a wonderful sci-fi concept with all kinds of unsettling implications.

That said, I'm a little mixed on the notion that the protagonist is your soul. Sure, it's appropriately meta, and lends surprising weight to certain plot twists. But it practical terms, it's a gimmick Quantic Dream uses to artificially raise the stakes. "It's not just the game world that's in danger," Omikron's characters tell you, "it's your very soul! If you lose the wrong battle, your enemies will trap you here forever!" Yeah, no. Unless you actually believe your soul was sucked into the game, this threat doesn't hold much weight. Even if it did, Omikron has a save system in place - you could just reload and try again. The better approach would've been fleshing out Omikron's characters so we feel upset when something happens to them.

Not that I fault Quantic Dream for trying something different, but every element of Omikron is competing to be unique instead of functional. That means gameplay quickly descends into a mish-mash of genres and mechanics that barely fit into a coherent whole. And I haven't even had time to cover other annoyances with the game - such as how those rare magic rings are automatically spent at save points without telling you they're a limited resources. (Believe me, this is a problem when you're at a crucial juncture and realize you don't have enough rings to continue.)

Yet despite its "everything but the kitchen sink" design, there's a real creative spirit in Omikron that's hard to miss. Somewhere beneath these awkward controls and half-baked gameplay modes is a drive to push the boundaries of what games can accomplish. With a little more polish, Omikron could've pushed open world games in new directions instead of being relegated to the status of a quirky classic. That's something I'd love to see more developers attempt, because maybe someone will actually accomplish the impossible and make us feel like our souls have travelled to another world.