It's certainly not a well-kept secret that Nintendo began life well over 100 years ago as a playing card manufacturer, but as with all aspects of Japanese culture, the basic truth is far removed from the intricate, tightly woven facts. From Godzilla, solitaire mahjong, snap and bingo to the magical merchandising world of Pokémon, you may know more about Japanese playing cards than you realize.

Latin Japan
For an aspect of Japanese leisure so deeply ingrained in the country's long and rich culture, it seems somehow surprising that the word karuta - the generic Japanese term for playing cards - actually comes from the Portuguese word carta (meaning exactly the same thing). This is a direct descendent of the Latin word for paper, although its Indo-European inflection leans toward a closer translation of "card," "map" or "chart." So although it'd require something of a skyward view, it wouldn't take Johnny Cochrane to argue that Nintendo's history began almost 1,000 years ago ... in Europe!

Tenuous timescales aside, by investigating the history, use and contemporary application of karuta, we can see it wasn't quite such a random transition the game giant made when moving from playing cards to videogames.

In the mid-16th century when Portuguese explorers brought the famous (or infamous, depending on your ecclesiastical temperament) founder of the Jesuit order, Francis Xavier, to convert the heathen Japanese, they also brought with them several packs of Spanish, 40-card decks for playing the popular gambling game hombre (better known these days as tresillo). Although Christianity found some meager purchase among the Japanese, and a minor portion of the population were converted, Spanish playing cards found unprecedented success and spread like wildfire through all social classes of the Far East.

When the Tokugawa Shogunate shut down Japan's borders at the beginning of the 17th century, it also made a sincere attempt to aggressively purge all forms of gambling; including (and especially) card games . While it must have been a constant irritation (not to mention danger) for gambling houses to continually dodge the government's legal swords by repeatedly reinventing the decks and their games, it also led to a wealth of exploration into the world of competitive card playing, manufacture and design.

By the late 1700s, the new Kensei administration (which, rather appropriately, means "Tolerant Government") finally acknowledged the populace was going to play card games regardless of how many times they were officially banned, designing a game deliberately intended to make gambling difficult, while still providing an engrossing, addictive and easily popularized experience. The result, was hanafuda; the flower cards. Needless to say, gamblers soon put them to nefarious use, but before we discuss how to lose money and influence people, let's take a look at how the game is actually played. 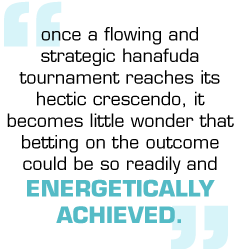 Hanafuda Fun
Although the intention was to develop a game inherently hostile to gambling requirements, once a flowing and strategic hanafuda tournament reaches its hectic crescendo, it becomes little wonder that betting on the outcome could be so readily and energetically achieved.

A hanafuda deck is sufficiently different in both design and principle to make it appear somewhat alien to Western eyes, despite some distinct, if hidden similarities. The cards themselves are smaller but thicker than their Western counterparts; granting a wonderfully satisfying "smack" when enthusiastically dealt, but requiring an entirely different set of dexterous skills for the seasoned card shark to handle them with any grandeur. Shuffling by way of lithe wrist action and flexing the cards to their elastic limit is not an option, demanding the dealer adopt more of a fluid, tabletop based cutting action to properly randomize the deck.

The deck itself consists of 48 cards split into 12 sets of four, each set representing a month of the year. As part of the game's gambling aversion, no numbers were included on the faces, with artwork and text left to define their status instead. The artwork, while varying greatly depending on the artist, represents the month in a manner of cryptic and environmental fashions most closely related to Japanese impressions of the particular time of year (a matter which can be initially confusing to foreign players).