In recent years, this trend has seen a monumental resurgence in popularity through not only the storytelling media exploiting karuta's compartmentalized versions of history (such as the Godzilla franchise), but in trading cards and videogames, which draw upon the comparative scoring nature established by the card-playing fraternity centuries ago. Most popular among the karuta re-imaginings of recent years is the second-most valuable videogame property ever conceived: Pokémon.

Traditional Iroha Karuta, however, used two different decks of small playing cards (rather than serial linked Game Boys); yomifuda, reading cards, and torifuda, grabbing cards. Poems are written on the cards and divided between the two decks, forming matching pairs that make a full verse when the two cards are brought together.

Generally, there'll be a gathering of people, friends and families in their Sunday best, knelt in pairs about a tatami matted floor with their reading cards split between them and laid out in front. The torifuda are spread face up between the pair, ready for the speaker (sat in a position of revered authority at the head of the room) to begin reciting one of the 100 famous love poems from Japanese history written on the cards. 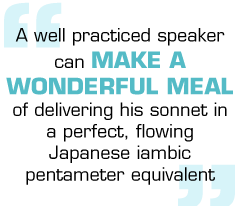 Some of these poems are unique, so the first syllable is more than enough for a seasoned exponent to identify the torifuda card, while other verses can only be identified by the very last line. A well practiced speaker can make a wonderful meal of delivering his sonnet in a perfect, flowing Japanese iambic pentameter equivalent, bringing the excited apprehension of the entire room to a tense zenith before a flurry of super-fast hands snatch at cards like a Samurai drawing his sword in a duel.

Karuta is particularly well thought of for its educational and social properties every bit as much as it's sporting gameplay, however. Players are required to learn not only the ancient poems written on the cards, but also ensure their proficiency in reading hiragana (one of the traditional written Japanese forms) and even, in the case of the most expensive or antique decks, Chinese characters.

This game technically outdates hanafuda, having been played by Japanese nobility long before the Portuguese first landed, using elaborately painted sea shells rather than cards. This made the game considerably less accessible and less practical. The real popularity of the game wasn't realized until it was successfully crossbred with infinitely versatile playing cards.

Nintendo Karuta
In 1885, Japan finally lifted its ban on the many different styles of playing cards and the gambling games they were suited to, prompting aspiring businessman Fusajiro Yamauchi to set up business in Kyoto manufacturing handmade hanafuda from the bark of mulberry trees. His new company, Nintendo Koppai, met with considerable success, particularly when gambling joints (more often than not run by Yakuza) began using them in high stakes games.

This saw Nintendo rapidly become the largest playing card manufacturer in Japan, and the first to domestically produce the Western decks we know today. Along with regularly commissioned new artwork for hanafuda decks (celebrating all kinds of occasions, ceremonies and holidays) and an early deal with Disney to produce licensed playing cards featuring the animation giant's characters, the playing card business has kept Nintendo (which was even renamed Nintendo Karuta at one point) in champagne and caviar for over a century; only recently replacing its primary business with videogames rather than card games. To this day, Nintendo of Japan still produces a well-respected and highly sought-after line of traditional playing cards.

This abundant, rich history of card games still provides our global entertainment industry with a wealth of both direct and inspirational material, and without doubt many of the leading videogame developers who've shaped our playing habits over the last three decades would never have considered amusing us so profusely if it weren't for the long and celebrated card-playing culture of Japan.