Every hardcore Magic: The Gathering player knows the story behind the trading card game's rarest card. In 1993, Magic designer Richard Garfield planned a surprising way to propose to his sweetheart, Lily Wu. Garfield commissioned a painting from artist Quinton Hoover and fashioned it into a Magic card he called "Proposal." "Allows Richard to propose marriage to Lily," the card read. "If the proposal is accepted both players win; mix the cards in play, both libraries and both graveyards as a shared deck."

Garfield made a deck including Proposal and then challenged Lily to a game. But because he'd assigned Proposal a high casting cost of 4 white mana, he had great trouble playing it. In this situation, gamers of lesser integrity might fudge the rules: Revise the casting cost on the fly, perhaps, or even (egad!) just play the card, not tapping four Plains or Mox Pearls, no!, just slap down Proposal willy-nilly, bend the knee, present the ring, you're done! Not tournament-legal, but who cares? Garfield - this is a telling point - Garfield cared. It took him (the story goes) four games to finally play Proposal legally, with Lily ever more impatient to quit. To Propose in violation of the rules, you see, would found the entire marriage on a lie.

The outcome is told by Splendid Genesis and Fraternal Exaltation, Magic cards the couple commissioned in 1997 and 1999 to announce the births of their two children. 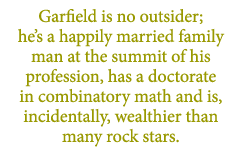 In what terms can we praise this? The behavior has no defined precedent. It's not "cool," at least not according to society's arbiters of cool. You'd never see a rock star, say, propose by playing a card game. It's not weird eccentricity, either, in the manner of outsider art. Garfield is no outsider; he's a happily married family man at the summit of his profession, has a doctorate in combinatory math and is, incidentally, wealthier than many rock stars.

Yet through his long history of sensible decisions and individual style, Richard Garfield has become, if not "cool," then remarkable. Today he represents something almost as rare in paper gaming as a Proposal card: a role model.

I've known many designers of paper games. Garfield is the smartest and, demonstrably, the wisest. He has sidestepped the hobby's typical success path, a dismal progress defined by young geniuses with meager life experience. In two sordid decades from Dungeons & Dragons onward, nearly every designer of a hit paper game unfailingly followed the same pattern, as if railroaded through a packaged roleplaying scenario:

In contrast, Garfield has designed his own success scenario. When Magic became an instant hit for publisher Wizards of the Coast at its 1993 debut, he (co-owner of Wizards) purposely distanced himself from routine business. Though the company endured many tumults specified by the standard pattern, he somehow floated above them. He supervised the Magic design team not lightly, but with mature detachment.