When a long-awaited game is finally released, it enjoys little time in the limelight. The pressure to keep the news and previews coming means very few games outside of the persistent MMOG genre receive any sustained coverage or discussion, once the review hits print. Even good games become ephemeral; this week's big game is already yesterday's news. Even if a subsequent patch makes dramatic changes to game balance or a mod community grows around a title, it's unlikely the game will get a second look from most pressmen. For example, The Sims continues to dominate sales charts - people are still buying the core game - but there is a remarkable lack of analysis of the persistence of this franchise. You can argue that The Sims was only a story when the original game came out, but in an industry so proud of its economic footprint, it's still a story. But novelty is gone, even as EA recognizes the series is big enough to be its own corporate division. 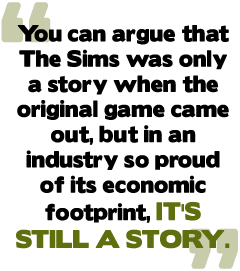 From a development perspective, if you make a good game that doesn't immediately attract a following, the rush to the future hurts you even more. Passing quickly from the public eye, it's hard to build up any word of mouth, especially if you were just a temporary blip on the radar to most readers. A lucky few may find an audience with the inevitable price drop, but it's more likely gamers will forget about you altogether, as the press buzzes around the new game their readers are supposed to care about.

The larger cost of the entire approach is significant. Both journalists and developers like to portray games as items of cultural importance, but, so long as the subjects of game journalism are treated as little more than items for sale, it becomes difficult to make that case. "What are you playing now?" and "What are you looking forward to?" become the only questions anyone is interested in, robbing readers of the opportunity to make connections between the games they play, the people who make them and the lives they lead.

Adjusting from the future-leaning promotion machine to a more insightful and analytic critical press won't be easy. The Web 2.0 movement, with its user-generated content, forces writers to rely on sensationalist antics to get people talking about the stories they write, and gamers were early adopters of the Digg mentality. As a business, the game press needs to serve its consumers, but sometimes serving them means giving them the medicine they need to grow beyond the game-writing equivalent of the chicken pox.

Troy S. Goodfellow is a freelance writer based in Maryland. He reviews strategy and wargames for a number of outlets and maintains a blog at www.flashofsteel.com.

Why So Serious Sean Sands 47 Comments
Comments on