Fortunately, I respect honesty 1,000 times more than I respect ass kissing, so that wouldn't happen with me in the real world, but I'm not representative of everyone.

For fansites, the user base is no less critical than it is for general gaming sites. If you piss off your readers, it's entirely likely you'll never be forgiven, and they'll simply flock to someone else with the same information as yours. Fewer users often make for less developer support, and your wonderful fansite will dive headlong into a death spiral. 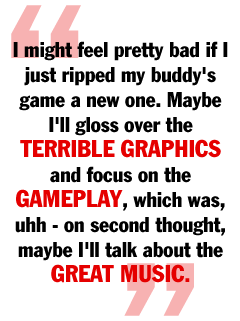 And let's not forget the friend factor. You can't help but make friends when you are part of the game industry, either as a member of the media or a developer. I might feel pretty bad if I just ripped my buddy's game a new one. Maybe I'll gloss over the terrible graphics and focus on the gameplay, which was, uhh - on second thought, maybe I'll talk about the great music. Ah, but now I've lied to help my buddy. Integrity gone.

Toss in the fact every single member of the gaming media has at one point or another considered getting involved with game development. What better way to a developer's heart than to lavish him with praise (answer: pie [especially pumpkin])? In an industry this small, it doesn't pay to make enemies. Developers shift to different companies all the time, and people remember you.

If you think this is just coming from some dummy who works in the game industry, think again. I'm a dummy who has been on both sides of the fence. I used to run fansites and a general gaming site, and I've worked at two companies where I directly interacted with fansites and the general media.

What I've learned is it's not the fault of just the gaming media that they have to sacrifice their journalistic integrity. I blame everyone involved - the players, the developers and the media - in equal parts. It's no different from the media in the real world: "Why doesn't [insert name of popular TV news program here] ever run happy stories, Daddy?" "Well, son, it's because you're a morbid bastard and would change the channel if they ran that hogwash."

Is there really any way to create a successful gaming website without sacrificing your integrity? Sure! Stick to your guns. Never sacrifice that integrity. Sites that refuse to hold grudges and don't have any bias do have a place in this world, but if you waver from that integrity even just a little bit, the site is doomed.

There are a few honest gaming sites out there, but for every one honest site there are a metric ton on the bandwagon brigade (and a few of the "We go against the grain because it's cool to be edgy" mentality, but they're still on the bandwagon, it's just a slightly more idiotic one). The trick, as a journalist, is figuring out what your integrity is worth to you, and whether or not sacrificing it is something you can live with. The path of the disingenuous is better-worn, but those who opt to do things the honest way are usually better for the experience.

Ryan Shwayder has been named Community Relations Manager/Designer at 38 Studios and will be working to establish the company's presence through the web and other media. He volunteers his time for local IGDA chapters and is well-known for his game development blog at Nerfbat.com.