In 2001, I was a game reporter, and I was broke. Holes in the soles of my shoes broke, rapidly heading toward ramen broke. I was so broke I could no longer afford long distance phone calls to interview people. Luckily, there was a tiny MMOG company just a local phone call away. I became a believer and used my creepy internet fame to get them a little attention from the blogosphere, five years before we called it a blogosphere.

The company was Mythic Entertainment, and they eventually hired me to try answering questions instead of asking them. I have seven years on either side of the interview table, and that gives me a bird's-eye view of how web game journalism evolved from take-no-prisoners scrapping to the present day.

The story begins in 1999. By day I was a marketing cubicle slave writing snappy brochure copy, by night, an aspiring fantasy novelist complete with rattletrap typewriter. But it was damned hard to write anything, be it about the Future of Broadband or the Great Elven Adventure, over the constant caterwauling from my MMOG-playing roommates.

When one of the boys left his computer unoccupied for three days, the other roommates set me up with a pretty brunette avatar with a mean left hook. By the time my buddy returned, there were a lot of dead rats around the city of Freeport, and I had a backpack full of whiskers. Shortly after that, I had my own computer and my own EverQuest account.

The computer opened up all kinds of things for me. Every night, I was meeting people from all over the country - people who shared my interests. The in-game conversations turned into days spent exploring chatrooms and message boards; again, finding kindred souls. It was like going to nerd conventions without the smell.

And my writing career took off. I wrote special advertising sections, I interviewed local businesses for small city papers and I sold "personal essays" to a major market newspaper. Word processing instead of longhand composition tripled my output, and talking online with all my new friends made my written voice sharper, cleaner and funnier.

At some point, I felt the urge to give back to the gaming community, and I volunteered to provide customer service. These days, this concept strikes people as ridiculous, but at the turn of the century, in order to be the front line of customer service, you either had to train in Bangalore for six intensive months before being allowed near a phone, or you could do what I did and answer a questionnaire. 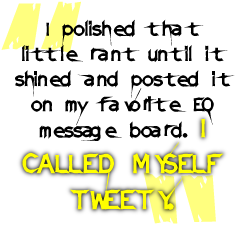 After weeks of not communicating with an actual company employee, weeks spent soaking up abuse from angry people, I snapped. I wrote out a rant and found myself laughing. I polished that little rant until it shined and posted it on my favorite EQ message board. I called myself Tweety.

I was used to writing for newspapers. If I was really lucky, my editors would write "nice!" on the check, but that was all the feedback I'd ever gotten. Writers of the wannabe flavor are essentially paranoid balls of neediness and insecurity. Those little editorial notes were like a single drag off a cigarette. The reaction to Tweety's first rant was like snorting cocaine. People loved it. There were hundreds of responses posted in less than a day. And I was hooked. I wrote four more rants, and my roommate built me a website to bring the hits in faster .

Quite justifiably, I was fired from my customer service job. But the website only grew more popular. I joined the staff of a gaming news site poised on the edge of world domination. Fan mail started coming in from around the world. Some of the letters were from ordinary people like me, but others were from game designers, writers, even senior leads at tech companies.