On the face of it, it's a simple system. Millions of gamers around the world turn to print and online sources for information on the newest games, and when they thumb through the pages of their favorite magazine or click around their favorite site, they see review scores, comparisons to other games and experiential analyses, all provided by game writers. But even in a relatively simple system like this one, there are wrinkles. And by wrinkles, I mean people.

From the audience to the developer, each title on the shelf represents the employment of hundreds, sometimes thousands of people, and the fate of entire companies often rests on whether or not you buy a game. Advertising plays its part in raising awareness of what's out there, but even ads aren't enough to sell games on their own. With hundreds of games on the shelves, the barrier to entry into your home isn't just awareness, it's also acceptance. And unless your game's title starts with Halo or Madden, you need a good review (or preview) to prime that pump.

Reviews work like this: The developer makes a game. Once the game is finished (but before it ships), a PR representative (sometimes we call them "flaks") sends a notice to various game writers and editors that a game is available for review. The PR flak sends out the game free of charge, then the reviewer plays it and writes several hundred words about it. The flak, having spread awareness about the game, considers his job done. Again, simple. Again, not really.

For starters, who is on the PR flak's list depends on a great many factors, including but not limited to who he (or the developer he represents) happens to like.

The "No-Arthur" Policy
"I found out today that [the website] has a 'no Arthur' policy," says Arthur, a veteran game reviewer working on the West Coast. His name isn't really Arthur, and he's speaking to us under conditions of anonymity. 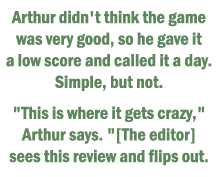 "This person actually makes no qualms over his relationship with the developer," says Arthur. "He takes trips out to Japan and visits him while he's there. He blogs all the time about being his best bud. [He] always seems to get exclusives out of them. It's blatantly obvious, and he never makes any [bones] about it. He is [the developer's] homeboy."

Unfortunately, Arthur didn't think the game was very good, so he gave it a low score and called it a day. Simple, but not.

"This is where it gets crazy," Arthur says. "[The editor] sees this review and flips out. He calls [a] meeting. ... He sits [the editorial staff] down at a table and says that this review is bullshit. ... He demands that the score be raised."

Although the rest of the team vouched for Arthur's review score, the editor in question, concerned the low score would jeopardize his relationship with the game's developer, refused to publish the review without an incremental increase in the score.

"I should have just told him to go fuck himself," Arthur says. "But that's the lesson I learned."

Arthur agreed to raise his review score, but even with the requested changes, the finished review painted a less than flattering picture of what was to be the site's featured game.

While Arthur's experience isn't unique, it is unusual. "Any player can write a review of a game," writes Justin Hall, for Online Journalism Review, "but only sanctioned media outlets have access to games before they are available to the public. Brokering these agreements falls upon an untoward mix of editorial and promotions." And these negotiations can often lead to long term relationships. Although most journalists and editors plead journalistic integrity in the face of payola or favoritism accusations, the most popular parties at E3, GDC and every other major game convention are the ones featuring an open bar and access to the developers.

Still, altering a review to avoid negative vibes is typically frowned upon, no matter whose game it is. The first question Arthur's usually asked after recounting his story is, "Why didn't this guy get fired?"