Or, as Gazunta says: "Pro tip: Read the review. Take the criticism to heart. Do better next time."

"The Opinion of a Stranger"
So what about the reviews, then? If the last three years of a reviewer's life is represented by dozens of reviews of other people's peckers, what does that say about the reviewer? And what can be done to improve the system?

As for the developers, they'd like to feel a reviewer is giving them a fair shake and not just punching a time card to cash a check - or to earn a trip to Japan.

"I get the sense that a lot of reviewers feel they have to appease publishers in order to continue to get the inside track on review copies, access to developers and so on," says Warren Spector. "It'd be nice if that changed. ... And I'd like to see reviewers express a more consistent ... philosophical approach to games, so readers could find the [reviewers] they trust and stick with them a little more."

Mike Krahulik agrees. "I'd try and create more personal relationships between reviewers and their audience," he says. "That way, readers can determine if a given review has any value to them because they'll know the reviewer. Otherwise it's just the opinion of a stranger."

As for the reviewers ...

"Use lots of References," writes "omni" from The Armchair Empire, in an advice column titled "How To be a Reviewer." "Any reviewer worth his weight in games should be able to quote book titles, some Shakespeare. ... Failing the ability to drop names and quote passages from obscure Russian plays or Monty Python, you can always mention every game you've ever played."

While tongue-in-cheek, the advice does at least offer a solution to the problem of consistency ...

"I would actually like more out of it," says LevelUp's N'Gai Croal, a bit more seriously. "I think as individuals we sort of have to say 'Let's [screw] around with the form more' ... let's not get locked into debates. ... Just rock out.'"

Which brings us back to you, the consumer.

"We can debate what art is, we can debate it forever," said writer, director and erstwhile game designer Clive Barker at this year's Hollywood and Games convention in Los Angeles. "But if the experience moves you, some way or another, even if it just moves your bowels, I think it's worthy of some serious study. ... Games aren't about reviewers, they're about players." 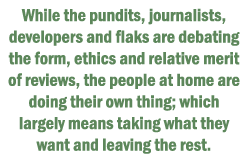 And, in a strange way some would call "meta," so are reviews. While the pundits, journalists, developers and flaks are debating the form, ethics and relative merit of reviews, the people at home are doing their own thing; which largely means taking what they want and leaving the rest.

"When I read reviews, I check the number score to see if it's above a 7," says Gamers With Jobs member Wordsmythe. "I then check [the] list of the good, bad and ultimate take on the game. If I'm still intrigued or confused, and if I have free time, I'll skim the first few and last paragraphs."

Russ Pitts is an Associate Editor for The Escapist. His blog can be found at www.falsegravity.com.