Murder mystery party games have brought roleplaying to the masses. How to Host a Murder, Murder in a Box, Host a Murder Mystery, A Party to Murder, An Evening of Murder, Dinner and a Murder, and two dozen other series give your mundane friends, and even your aged Aunt Ethel, a respectable excuse to dress in costume and play let's-pretend.

For hardcore tabletop roleplayers who spend 45 minutes reciting their drow elf's career in Menzobarranzan whether or not you asked, these party games, in themselves, offer little interest. Their design techniques are, to put it politely, well understood. Murder games exist entirely outside the gamer subculture, like roleplaying games from some mirror universe that never invented a 20-sided die. Just as Agatha Christie mysteries don't focus on character development, these games don't aim for a roleplaying challenge. You might call them "outsider" games, but to Aunt Ethel, murder games are mainstream, and we're the outsiders.

But surprise! These party games can, after all, offer unexpected design lessons. They may even hint at an unfilled market.

For many players, their favorite murder party game was their first. Raymond Chandler wrote a line that could easily apply: "Alcohol is like love. The first kiss is magic, the second is intimate, the third is routine." 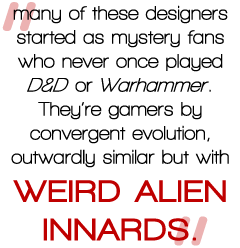 In case Ethel isn't around to tell you, it works like this: The party organizer sends her an invitation announcing it's 1928 and old, unlovable Uncle Frederick has been slaughtered. She and the other guests - suspects, investigators or both - must meet at the Ritz-Carlton Hotel (that is, the host's home) to uncover the murderer. Her particular invitation assigns the role of carefree flapper Sally Danforth and offers costume suggestions and rudimentary roleplaying tips. At the party, the host gives her either a read-aloud script or a handout with clues and secrets, reads a script or plays a CD with background info, and sets her mixing with other guests before and during dinner. Maybe Sally Danforth finds out she's the murderer; maybe she doesn't even know. The game seldom requires "investigation" as in real murder mysteries; it's a pretext to let guests mingle in a safe, structured way. The game may present a sequence of scandalous revelations, with new handouts for each dinner course. At evening's end, the host polls everyone for final accusations and guesses, and then either plays a CD, reads a script or otherwise reveals the murderer.

Obviously, the mysteries vary in quality. Some dangle too many red herrings or contrive inane solutions. But as with tabletop roleplaying campaigns, the event's success or failure seldom depends on the game proper. Novelty is a big factor, and even more important is chemistry among the guests. Murder games succeed less through writing than through event planning.

The Age of Hero Allen Varney 7 Comments
Comments on