To hear Troy Hewitt, a writer and community event manager, tell it, The Matrix Online, Warner Bros.' ill-fated attempt at an MMOG, wasn't just some movie spin-off. Like so many of the other Matrix projects, it told an integral part of the Matrix storyline, supported around the clock by actors and writers.

The players had a purpose in that world. The Matrix Online picked up after the third film in the trilogy, and if a fourth movie were ever to be made (and that's a big "if"), it would reflect everything that happened in the online game. And the die-hards who collaborated with Morpheus and ran missions for Seraph would be remembered. As he said in 2005, "Our intention is that players who play a really big role, or make a key decision, become part of the Matrix canon, and they become part of the story." It was a long shot, but it was a breakthrough. And when you think it through, it was all but inevitable.

Today, our pop culture spawns transmedia properties. Films expand into books, comics and games - and the other way around. Unlike in the old days, when a tie-in meant a cheap lunchbox or a cheaper videogame, every new medium adds to the story. Transmedia critics such as Henry Jenkins detail the ways fans can take part in these worlds: They can swap tapes, wiki the subplots, speculate on discussion boards and share fan fiction. Videogames let us act out scenes from the films or slouch around J. R. R. Tolkien's Middle-earth and break into Tom Bombadil's house. 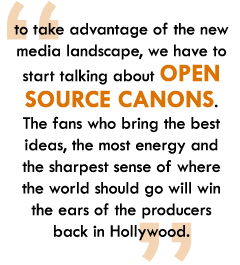 But at some point, if you keep inviting people into your world, you have to give them a stake in it. When consumers stop consuming and start creating, the energy and ideas they feed into these worlds have to change it. All geeks get the concept of "the canon," which defines the history and rules of a fictional world. But to take advantage of the new media landscape, we have to start talking about open source canons. The fans who bring the best ideas, the most energy and the sharpest sense of where the world should go will win the ears of the producers back in Hollywood.

And games are a great way to get things started.

On a small scale, you can find plenty of examples of this kind of collaboration. In MUDs, players can graduate to "immortals," designers or administrators. On a larger scale, alternate reality games (ARGs) put their puppet masters in direct contact with the players, in real time - which means the players have a chance to screw up the story. For example, 42 Entertainment's Elan Lee recalled to the ARG Netcast the "Sleeping Princess" betrayal in I Love Bees: "We had a good guy hiding from a bad guy, and the players knew the location of the good guy, and the bad guy asks the players, 'Where is this little sleeping princess, so that I may go and kill her?' - and the players said, 'Oh, she's right over there. Go for it.'"

You can also bring players into the development cycle from the beginning. The ARG World Without Oil was defined as a collaborative storytelling exercise; the writers laid out a scenario, and the players had to write about how they'd handle it. And Terra Drive Live, a massively-multiplayer offline game that will debut at this year's Penny Arcade Expo, has set up a wiki where players can design weapons, name planets, and suggest themes and stories. The game is a work in progress, and instead of being play-testers, the early adopters become legit co-authors.

Who's Afraid of the Big Bad Wolf Erin Hoffman 5 Comments

Letters to the Editor: Editor's Choice The Escapist Staff 0 Comments
Comments on