The problem, Hamann said, was by the time the postmortem hit, the place where it could have been maximally useful - during the project it's discussing - is already gone, its team most likely moved on, even fractured or dissipated depending upon the project and the developer. Why not, he asked, actually try this during the development cycle?

What he found through his process, which emphasized feedback from the development team itself - even anonymous feedback, if necessary to break the ice - was that not only did it result in more efficient process and better results, but its impact on team morale and company morale was huge. Developers were taking ownership not just for what they did, but how they did it.

CSA is itself a sort of common sense evolution with the Agile methodologies conceived in mainstream software development, and it is employed by numerous teams across many studios. But its basic principles of morale-building, communication, collaborative management and flexibility of production methodology also exist at the core of the new method that has been sweeping the industry over the past year: Scrum. 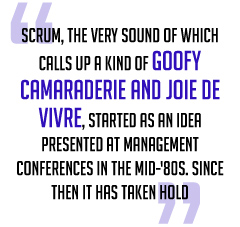 Named for a rugby formation, Scrum, the very sound of which calls up a kind of goofy camaraderie and joie de vivre, started as an idea presented at management conferences in the mid-'80s. Since then it has taken hold, and Ken Schwaber, one of its core founders, now runs a consulting company, Advanced Development Methods, focused solely on instructing in Scrum practices. Often paired with other methodologies, Scrum focuses on the lightweight application of team-driven management and iterative development - meaning evaluating your process and changing your tactics if one method isn't working.

Two years ago, the word "scrum" started to buzz in game management circles, a buzz that in the interim has turned into a roar. Developers in producer positions are becoming Certified Scrum Masters (to the hefty tune of $1,200), a title that is now starting to show up in job headers at companies like BioWare.

The industry focus point for the effectiveness of Scrum was the team at High Moon Studios. The two Scrum gurus were the studio's CTO, Clinton Keith, and then-Chief Architect Noel Llopis. Keith joined High Moon midway through its debut title's production, Darkwatch, and the studio was having a rough time. The introduction of Agile methods brought the game to ship, and High Moon has been a case study for Agile and Scrum ever since.

We Can Do It
Scrum follows the Agile manifesto and emphasizes responsibility and ownership by individual team members. The details come out in Ken Schwaber's book on Scrum, but on a basic level, Keith says, Scrum emphasizes: self-management, iterative development (meaning each short phase of development, called a "sprint," is analyzed after it is completed) and engineering tools that facilitate this flexible process. Scrum also emphasizes stability of the product and what Keith calls "stop-the-line" culture and tools.