Forty-year-old FreeCell had been on my computer since I first got Windows 95, but I didn't discover it until I entered office life. To be sure, I knew it was there, tucked away under my Start menu, but like any serious gamer I scoffed at the thought of playing solitaire rather than Soul Reaver, FreeCell rather than FreeSpace. Not until I was without a choice did I turn to Microsoft's built-in games. 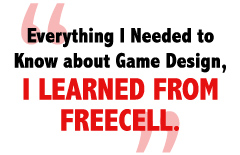 I already had many years of game design under my belt before I fired up FreeCell. Otherwise, I could've titled this article, "Everything I Needed to Know about Game Design, I Learned from FreeCell." That's because despite its superficial inadequacies, FreeCell epitomizes four key virtues of good game design: Goals; Immediacy; Pacing; and Fairness.

What's FreeCell?
FreeCell is a solitaire card game. But that's misleading because card games tend to be about luck, and solitaire games (particularly the most famous Klondike variety) are usually unthinking and tedious. But FreeCell is not a mechanical game of chance. It's a puzzle game defined by skill, one that is "provably hard," meaning it's so complex a computer can only win by brute force.

Nevertheless, the rules are straightforward.

The game board is divided into three regions. In the upper left are four "freecells." In the upper right are four "homecells." All eight of these are empty at the start of the game. Below is the "tableau" - eight columns of cards dealt randomly. Because there are 52 cards total, the columns are uneven. The first four, counting left to right, have seven cards. The last four have six. FreeCell is an "open" solitaire game, meaning the cards in the tableau are dealt face up for the player to see.

The objective of the game is to fill the four homecells. Each homecell corresponds to a suit, and each must be filled starting with the ace (which counts as a 1) and ending with the king (13).

The Four Virtues
FreeCell's goals are nested and clear. From the moment a player deals a hand, he knows what he has to do: fill the four homecells. That means he immediately has four short-term goals, specifically to place the ace of each suit in its homecell. To do that, the player scans the field and locates the aces. He then has to find a way to dig the aces out of their columns; this usually entails packing the cards that are on top of the ace onto different columns. If he wants to move a black jack, the player must find a red queen. This, in turn, may require moving other cards.

Shut Up and Sit Down: Machi Koro and Splendor - Gambling Has Never Been So Much Fun! Quinns 1 Comment