At this year's Game Developer Conference I had the opportunity to speak briefly with Eric Peterson, President of Vicious Cycle, developers of Dead Head Fred and Puzzle Quest for the PSP, a series of children's television and movie-licensed products (Dora The Explorer: Journey to the Purple Planet, Curious George and Flushed Away) under the Monkey Bar brand, and creators of the Vicious Engine, a multiplatform middleware solution.

At the time, Peterson had some less than flattering things to say about game reviewers who expect every game to be Halo ("We're the real developers") and comparing rapid release licensed kids' games to blockbusters produced by developers with multi-million dollar production budgets and three-year production cycles. His comments created somewhat of a firestorm.

Following GDC, I was invited to take a tour of Vicious Cycle's Chapel Hill, NC offices and to meet with Peterson and Vicious' Director of Business Development, John O'Neill. We talked about the company's multi-platform middleware solution, Vicious Engine, why their booth was swamped at GDC, the Wii-based FPS they aren't making and how Eric's incendiary remarks at GDC may have been misinterpreted. 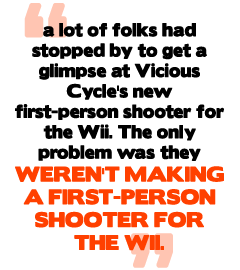 The first part of our conversation revolved around our meeting at GDC, where I'd made an appointment weeks ahead of time, but got bumped (politely) by throngs of potential customers for the Vicious Engine. (Why talk to a reporter when the customers are already lining up at the door?) Peterson was kind enough to talk with me for a few minutes in the aisle, before dashing back to his booth to woo more potential clients. Afterward, at the Vicious Cycle offices, I asked him what all the fuss was about.

In addition to having exclusive first looks at Collision Studios' 300: March to Glory, developed for PSP using Vicious technology, on the same day the movie was released, a lot of folks had stopped by to get a glimpse of Vicious Cycle's new first-person shooter for the Wii. The only problem was they weren't making a first-person shooter for the Wii.

"That was actually the tech demo for [Vicious Engine on the] PSP from last year's GDC," Eric said. "We ported it to Wii in a day and a half."

With interest in the Wii at a fever pitch, even a rumor about a shooter utilizing Nintendo's revolutionary control scheme was enough to turn heads and jam the aisles around Vicious Cycle's booth. But the real story is more impressive. Making a tech demo in a day and a half is one thing. Building an entire game from scratch in four months is another.

"Early on ... we went about trying to save time and resources," said Peterson, referring to the early days of Vicious Cycle, after layoffs at MicroProse's North Carolina studio left the Vicious Cycle founder looking for work and a way to ensure the survival of his fledgling company. "I think we luckily took the right step forward initially to make sure it was easy for us to move Robotech: Battlecry for PS2, GameCube and Xbox simultaneously without any effort. We didn't really think of it as porting at that time. ... We utilized the same art assets and everything.

"When we did a revision of the engine in 2002, we made some changes [and] all those things that we learned went with it. ... Curious George (released in 2006) was four SKUs in four months from scratch. That was when we knew the engine really worked."