In terms of size of purchase, a gaming console falls somewhere between cars and soda. However, as the recent debates over the PlayStation 3 have illustrated, a console is a significant purchase for most consumers. Few teenagers have access to the amount of money required to purchase multiple consoles. While the experience on each console may be roughly equivalent, the disc formats on each console are proprietary. The high cost of the console to the consumer must be amortized over a large number of games, and publishers tend to abandon any console without a large user base. Those who have already purchased a console have a vested interest in the believing it will continue to remain viable in the market, and even have a motivation to convince others of the fact, evangelizing their purchase.

With all these psychological forces and economic incentives, a fanboy's favoritism doesn't even have to be conscious, and the power of subconscious motivations may be more powerful than anything the waking mind could construct. According to a 2005 study, regular gamers showed responses to images of game screens similar to those observed in drug addicts when presented with objects they associated with their drug use. Even if we choose to disregard the arguments that games themselves may be addictive, such strong associative effects couldn't help but have some impact on people who devote so much of their lives to a single pastime.

Henry Kissinger once said, "Academic politics are so vicious precisely because the stakes are so small." Where could the stakes possibly be lower than on an online gaming forum? Internet conversationalists aren't even as responsible for what they say as their physical counterparts are. Arguments and random speculation rule the day.

As it turns out, fanboys may not actually even be arguing with anyone. A 2006 report in the Journal of Personality and Social Psychology indicated that although people almost always assume their interpretation regarding the tone of an email is correct, their actual accuracy rate is closer to 50 percent; it's not a stretch to assume the same percentage applies to message board conversations. Maybe a great deal of the perceived bias and vitriol isn't meant to be taken seriously, or is itself a knee-jerk reaction to the fanboy's misinterpretation of another person's message. Since there's really no way of knowing which half of the messages are being read correctly, it is possible that to other people on the other side of the computer screen, the fanboy is us. 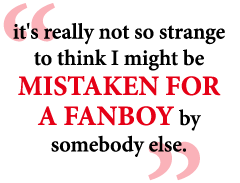 And it's really not so strange to think I might be mistaken for a fanboy by somebody else. I may not feel the pull of the fanboy community's unconditional acceptance as strongly as a 15-year-old, but I feel the pull of nostalgia more. And I'm certainly in no position to determine which way my own subconscious biases flow or which messages I'm liable to misinterpret. At the end of the day, a fanboy is simply somebody who is deeply passionate about games, something we're all guilty of.