During the rush last Christmas, I camped outside overnight for a Wii. It was cold and miserable, but I got one. I anxiously brought it home and put the box in my living room, then went to the kitchen for a drink. I came back to the living room to find my 2-year-old daughter jumping up and down on the unopened box. I was not happy. It was then I realized parenthood had turned me into a casual gamer.

Casual gaming had crept up on me. In all the Christmas hype, I had fooled myself into thinking a new console and I could make beautiful gaming magic together. Who was I kidding? Time constraints aside, where was I even going to put the thing? Would it go somewhere between the train table buried in baby toys and the kitchen play set? Unlikely. As I packed the components back into the bag, I tried to figure out what went wrong. 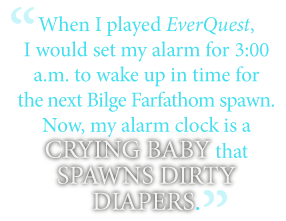 I already owned a PC, PS2 and a PSP and barely had the time for them. My Guitar Hero controller had already been ravaged by my 2-year-old, the TV was covered in finger- and handprints and the PSP was caked with dried Go-gurt. Times were hard and gaming time was becoming scarce. What had happened to me? I used to be the guy who could stay up for hours on end playing FPSes, MMOGs, you name it. When I played EverQuest, I would set my alarm for 3:00 a.m. to wake up in time for the next Bilge Farfathom spawn. Now, my alarm clock is a crying baby that spawns dirty diapers. It just isn't fair.

My downward spiral into casual gaming didn't happen overnight. The first baby was easy. All she did was eat, poop and sleep. Blizzard released World of Warcraft right about the time I started my paternity leave, so I spent most of my journey to level 60 with a sleeping baby in my arms.

It got harder when the second baby came, but it was still manageable. Since the first girl was a toddler by then, the marathon gaming sessions with a baby zonked out on my chest were over. My playtime became limited to nap time, when both kids were asleep; the most precious two hours of my day. I figured out if I unplugged the second controller and handed it over to the kids as they were waking up, I could squeeze in an extra 15 minutes before they got wise.

With my game time shrinking, I was grasping for ways to reclaim my favorite pastime. I purchased a PSP with the idea that I could play it while on the go and over lunch breaks at work. But even that didn't work. I surrendered the PSP to the grubby little hands of children, where it was relegated to a portable movie viewer to keep my demon spawn from wreaking havoc on long flights and at restaurants.

So here I am with a third baby on the way; my oldest is 3, and I have come to terms with my affliction. Casual isn't bad, just different. My 3-year-old occasionally sits on my lap when I play World of Warcraft now. Her favorite thing to do is to press the space bar over and over while I am running around Shattrath or trying to heal the main tank in Karazhan. My wife and I take turns playing Guitar Hero while the kids dance around the room. It's become a nightly routine before bath time.

The thing I failed to realize was that my transition from hardcore to casual was really a transition from solo gamer to family gamer. Once I started sharing gaming with my family instead of trying to keep it all to myself, it didn't matter what type of gamer I was; it all became special.

Aaron Griffith is a lifelong videogame hobbyist. He resides in Southern California with his wife and two kids.