As the internet grows in popularity, gaming communities are becoming more and more important to the game industry, and developers are taking note. Developers and publishers are devoting more and more resources to community management, but reading almost any game's "official" discussion boards is enough to make you wonder if game communities function more as holding pens for angry nuts than places to congregate over a mutual interest.

And yet through this struggle, mature communities have grown and become prominent. While this is natural to expect since gamers are getting older, hidden within the statistics is a story of the average gamer's maturation

Irony and Pwnage
The forum threads can be eerily similar, whether you read them on GeezerGamers, 2Old2Play, Gamers with Jobs, SeasonedGamers or any other of the growing communities for gamers who share either advanced age (you know, like being 30) or more life experience than the average gamer.

A lot of the threads at these sites crow about victory despite the winner's declining years, and at least imply a hearty taunt delivered over the body of the fallen foe. If they're playing Halo, they typically recount a "tea-bag" (a motion where the victor puts his genitals on the victim's body). If they're playing World of Warcraft, they talk about ganking gankers. So, really, the subject matter is the same here as everywhere else.

What distinguishes them from the corresponding threads on other forums, however, is the irony they almost always employ, by which the poster of the thread implies that his post says not what he actually feels about the glorious victory, but rather what someone on one of those immature forums would say after winning such a victory. The words "pwn" and "noob" are common vernacular. 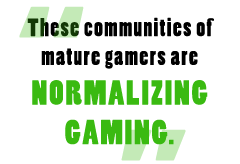 Now that communities have started to organize themselves around this irony, however, it's become an important irony: Its use as an organizational principle demonstrates that these communities of mature gamers are normalizing gaming. In the use of irony, they're demonstrating they're not like "normal" gamers, who are considered abnormal by the populace. And by being abnormal gamers, they're creating a new type of gamer: the normal gamer.

The normal gamer is the latest stage in a gestation that began with the advent of multiplayer online games and came to a head with World of Warcraft and the Xbox Live service. As two wildly successful products drew many different kinds of people into gaming or made them more active gamers, they discovered it wasn't possible to be normal and a gamer, as long as the only way to communicate with your friends was trying to get a word in between Chuck Norris jokes and racial epithets.

That wasteland still exists, prolonged I believe by the continuing operation of the mainstream's defining gamers as inherently abnormal, but now mature gamers of various sorts, whether older or seasoned in some other way, can confront it with the buzz-saw of irony.