Then, a funny thing began to happen: As their personifications of beloved characters became more absolute, they rarely spoke out-of-character at all. Those one- or two-word action descriptors became increasingly elaborate. They described the environs, their character's entrance into the room, what they were wearing. The subtlest shift of glance and tone was laid out alongside the language. In real life, they were mostly teenagers and young adults, up all night on their PCs. But online, in a chat room called Seventh Heaven Bar, they were Tifa, Cloud and Barrett, together again.

The descriptors became so verbose they strained the limits of AOL's chat field. One line became several, and novellas became the norm. In a room of 20 users, sometimes each waited in turn for the other to finish. More often than not, though, entrances and actions overlapped. Like a guild raid in World of Warcraft, it looks chaotic to an outsider, but familiar to regulars. They became expert in keeping it in order.

Still, conflict began to bubble up as the group chafed against the bonds of canon. In a room of three Rufus ShinRas, which one do the Turks obey? Isn't Aeris supposed to die? And can we have Super Saiyans in FFVII?

It gets a little more complicated when you add in the fact that they'd invented a battle system. Based on a simple dice-rolling macro, no one could quite agree on the rules of use. Hundred-strong guilds formed to govern such issues. At any given time, there were multiple ShinRa Electric Power Companies; one run like a Communist military stronghold, another like a frat house of rogue degenerates. In the battle for individual recognition in the noise, things got interesting.

It was a free-for-all, a constant struggle to see whose ideas were the most interesting, whose characters were the most original. The genetically-cloned son of Sephiroth and Aeris? Done. Tseng? Resurrected, five times over. It was beautiful chaos, and soon nobody cared about Meteor, Materia or the Planet. It was their world; FFVII was only living in its fringes. 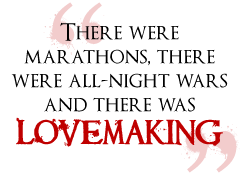 There were marathons, there were all-night wars and there was lovemaking, as Zack sneaked off to a private chat room with the SOLDIER commander's Chocobo-racing daughter. The city of Midgar was destroyed, rebuilt, destroyed again. New cities flourished, each with an elaborate role in the amorphous political climate. Fan art was requisitioned, scanned, uploaded and catalogued on guild sites. During those times, users often spent anywhere from five to 15 straight hours online.

When the son of Sephiroth broke up with his redheaded barmaid girlfriend, the real-life girl tracked down the other player's telephone number and phoned him at night, weeping. They ended up moving in together - in the real world. A young man who played the indisputable leader of a prominent ShinRa faction was arrested for some disciplinary trouble in school, and in his one quintessential jailhouse phone call, he telephoned not his parents, but his roleplaying lieutenant. "What will happen to the ShinRa?" he cried in a panic. FFRPers loved their own characters even more than the canonical creations that beckoned them to this world.

The Gauntlett: Beyond the Supernatural Was Some of Best Pulp Horror Gaming Ever Karloff 4 Comments
Comments on