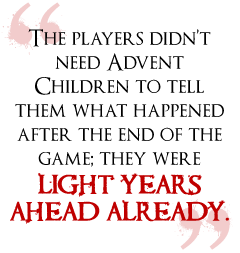 The years went by, and Square released Final Fantasy VIII, then IX, then X, and still they played on. A new console generation arrived, and they were unfazed. A proper Final Fantasy MMOG, Final Fantasy XI, arrived and precious few of them were even interested. It wasn't real enough; it wasn't their world. Even the 2006 release of a true canonical sequel to FFVII, the Advent Children film, made few contributions to the world. The players didn't need Advent Children to tell them what happened after the end of the game; they were light years ahead already.

But being so far ahead didn't spare them from entropy and burnout. Sprawl and disorder began to corrode their paradise. It became easier simply to chat among themselves than to roleplay. After all, all of these users embodied these characters and inhabited this world seeking somewhere to belong, and many of them began to realize they needn't try so hard or type so much to do so. The FFRP world's hardcore base retaliated in a backlash. They reorganized, they firmed the rules, they created ranks, and the veterans began to dictate to the newbies.

Chaos always seeks order - and in anarchy, an authority figure will always emerge. In FFRP, several did, but these few, once sampling a taste of power, only began to spread the locus of control, arbitrating what sorts of actions were permissible. They allowed actions congruent to their vision but censored conflicting impulses. An assassin character crept up behind a politico, aimed a gun at his head and pulled the trigger - and all play rumbled to a screeching halt and devolved into furious argument, as the politico's authoritarian roleplayer argued that such an absolute gesture could not be permitted and must be stricken from the record.

Characters stormed out. Whereas before, the only hiatus in play for many was when their parents suspended their computer privileges, people replaced their elaborate character profiles with ranting screeds. "Goodbye forever," they harshly declared, though they lingered on the periphery, watching and hoping for the return of the good old days. Factions shattered, and the shards mostly dissolved.

By 2007 - nearly a decade after the release of the game that started it all - things had fallen into ruin, leaving behind a world that no longer resembled the one from whence it came by any measure. There are still FFVII roleplay chat rooms on AOL, silent bastions where a few of the ancient veterans quietly lurk, keeping the faith. There are SOLDIERs with no general, a crumbling dictatorship with no revolutionaries to fight. And in scarce corners of the web, ancient guild websites still declare their supremacy over the others, as the winds of digital ghosts blow through the world they built and destroyed.

Leigh Alexander is Editor of WorldsInMotion.biz and writes for Destructoid, Gamasutra, and her blog, Sexy Videogameland. She can be reached at leigh_alexander1 AT yahoo DOT com

The Gauntlett: Beyond the Supernatural Was Some of Best Pulp Horror Gaming Ever Karloff 4 Comments